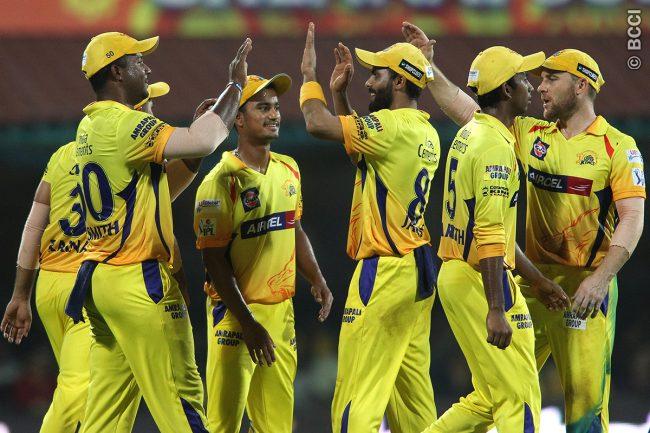 Taking on CSKâ€™s score of 148, Royal Challengers Bangalore opened with Maddinson and Kohli, but Maddinson was dismissed by Pandey for 4 in the 3rd over, bringing AB de Villiers into the action a little too early. Even though Villiers was in full flow, yet he was restricted by Pandey, who claimed him for Â 21. At the end of 5 overs, RCB had scored 34/2.

Mandeep Singh was the next man to be dismissed, thanks to a brilliant run out for 0, making matters worse for the Bangalore outfit. Dinesh Karthik and Kohli joined forces and quickly steered the team to 71/3, 78n required off 60 deliveries. The big twist in the match came along when Kohli was run out for 48 in the 14th over, immediately followed by Karthik who was taken by Nehra for 23, taking the score to 100/5 in 15 overs, 49 required from 30 deliveries. Khan was the next man to depart, taken by Nehra for 8, the next man walking back being Patel taken by Nehra for 0, another casualty coming in the form of Starc taken by Sharma for 1. Wiese was done in by Bravo for 17 and the last wicket to fall was that of Iqbal Abdulla for 0, wrapping up the RCB innings for 124.

Earlier, CSK won the toss and elected to bat first. Opening for the team under the 45 degrees blazing sun were McCullum and Smith, but it looked like the heat got the better of Smith, as he was dismissed in the very first over by Starc for 0. This brought Raina into the middle and the duo quickly too the score to 29/1 in 5 overs.

However, just when it looked like CSK had found a rhythm, McCullum was done in by Wiese for 20 in the 6th over, bringing du Plessis in. Raina began to take to the bowling, especially in the 9th over, taking the score to 68/2 in 10 overs. Raina was steady, bringing up his half century in the 14th over, but du Plessis fell on the other end to Patel for 24, followed by Raina for 52 in the same over, reducing the score to 101/4 in 15 overs.

Dhoni and Jadeja took charge after both the set batsmen were dismissed, but Jadeja happened to be the next CSK casualty, removed by Chahal for 3, and Dhoni departed next, deceived by Wiese for 29.The last over saw Starc unleash extreme demolition, scalping Bravo for 2 and Negi for 13, Mohit Sharmaâ€™s run out for 0 being the cherry on the cake. Royal Challengers Bangalore bundled of Chennai Super KIngs for 148/9.