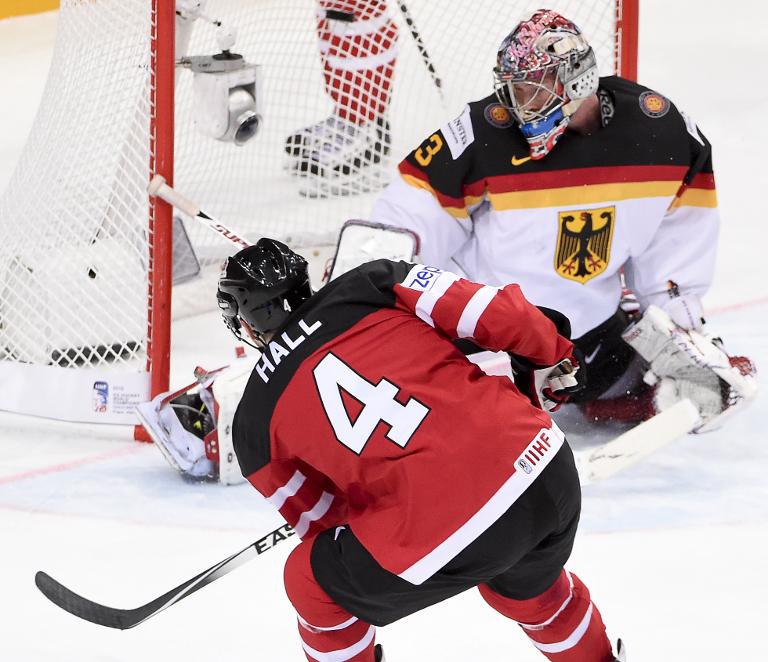 Edmonton Oilers forward Taylor Hall scored a hat-trick as Canada trashed Germany 10-0 at the ice hockey world championships on Sunday to go top of Group A with a perfect record.

Seeking their first medal from the tournament since 2009, the Olympic winners from 2010 and 2014 converted ten of their 34 shots on the German goal.

Colorado forward Matt Duchene converted a penalty shot and added three assists while Dallas forward Cody Eakin scored twice to help Canada to the second win from two games, with an impressive score of 16 goals for and one against.

Los Angeles Kings goalie Martin Jones had an easy job stopping 17 shots for the first shut-out of the tournament.

“I think the most important thing is that we played as a team,” said Philadelphia Flyers forward Claude Giroux, who had a goal and an assist.

“We stuck to the game plan. That’s one reason we were able to score a lot of goals.”

Nashville Predators forward Filip Forsberg scored three goals and added an assist to lead Sweden to a 6-1 win over underdogs Austria that saw his team move to second spot in Group A behind Canada.

Sweden were 6-0 up in the 32nd minute when the 20-year-old Forsberg completed his hat-trick. Austria scored their consolation goal six minutes before the end.

Sweden had 41 shots on goal, against 17 for their rivals.

In the evening game in Group A, Nashville defenceman Roman Josi had a goal and an assist in Switzerland’s 3-1 win over France.

Switzerland took a 2-0 lead which France managed to narrow to a goal eight minutes into the third period, but Reto Suri sealed the Swiss win a minute before the end into an empty net as France had pulled their goalie.

In the eastern Czech city of Ostrava, defending champions Russia beat Slovenia 5-3 in Sunday’s first game to take the top spot in Group B.

In the second Group B game of the day, Slovakia beat Belarus 2-1 in overtime.

But Buffalo Sabres defenceman Andrej Meszaros put Slovakia level in just over a minute and then scored in overtime to hand Slovakia a second two-point victory from two games after a penalty shoot-out win against Denmark on Saturday.

Finland redeemed their 1-5 loss to the USA in the opening game when they beat Denmark 3-0 with three goals in the second period on Sunday.