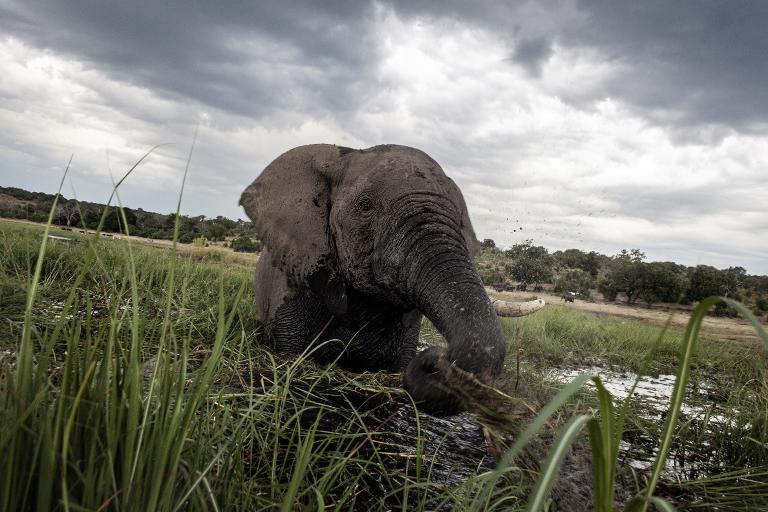 Surveying her destroyed cornfield in northern Botswana, Minsozie Kasaira wishes for a return to the days of elephant hunting.

Until last year, villagers like Minsozie benefited from local communities being given a quota of elephants that could be shot.

They often sold the quota to specialist hunting companies, with hunting rights bringing in tens of thousands of dollars.

But Botswana, home to a third of all African elephants, imposed an almost complete ban on hunting wildlife in January 2014.

Now villagers who lose crops to marauding elephants must find a new way to protect their livelihoods and replace the income generated by hunting rights.

“All the years when elephants were hunted, it was not like this,” Minsozie, 35, a mother of seven children, told AFP in the small village of Mabele.

“The first time I saw the damage, I was shattered. I thought, ‘The elephants have eaten it all, life’s not good anymore’.”

“As soon as we plant, the elephants take our crops. Last year we could get enough food from our field. Now it’s devastated. We don’t know what to do.”

Once the source of much-needed income, elephants have become a major nuisance to villagers living on the edge of Chobe National Park, where tourists come on safari trips from around the world.

“Hunters only employ people during the hunting season. (Tourism) is throughout the year, that’s why we prefer it.”

Hunting of almost all animals — by bushmen as well as overseas visitors — was banned by the Botswanan government to halt the decline of springbok and other species hit by habitat loss and illegal hunting.

But some wildlife experts and safari operators fear the ban could be detrimental.

“Hunting of elephants can be used as a way of sustainably generating revenue for elephant conservation,” said Julian Blanc, from the Convention of International Trade in Endangered Species (CITES).

“In many places, tourism doesn’t quite work… so hunting is an option available to all governments, and many of them use it quite successfully, as Botswana did for quite a few years.”

Elephant hunting for pleasure hit global headlines in 2012 when it came to light that Spain’s King Juan Carlos had been on a hunt in Botswana during his country’s economic crisis.

A photograph of him posing with a rifle next to a dead elephant propped against a tree caused outrage, even if safari companies say that hunting can be part of a wider conservation plan.

“During the hunting times, it was selective killing of the older bulls — the ones not breeding anymore,” Gerhard Swanepoel, co-owner of Pangolin Photo Safaris, based in Botswana, said.

“I will never say that I am pro-hunting (but) we know there’s too many elephants in the Chobe area.

“Botswana is one of the leading countries in Africa when it comes to conservation. It is trying to preserve space and let them roam around like old days.”

Mike Chase, co-founder of Elephants Without Borders, believes almost no elephants were poached in the country last year.

“These animals are highly intelligent. When they’re being disturbed in another area, they will move to where they know they’re going to be safe,” Chase said.

“And in the case of Botswana, lots of our elephants are essentially political refugees, fleeing persecution in neighbouring countries.”

After flying over the country for 100 hours, Chase calculates that 130,000 elephants live in Botswana — of a total population in Africa of 470,000.

But across the continent, 20,000 to 30,000 elephants are killed every year by poachers supplying the Asian market — mainly China — which highly values ivory products.

Environment Minister Khama is determined to preserve Botswana’s record on protecting its elephants.

“The elephants will find refuge in this country, and we will continue to assist, because if we don’t look after the species, who’s going to?” he said.

For Amos Mabuku, chairman of the Chobe enclave conservation trust, the government has forgotten the everyday reality that there are too many elephants near villages like Mabele.

“The attitude of local people has changed, it’s becoming negative,” he said.

“We used to tell the community ‘conserve elephants’, so that you get profit. But now why conserve?” he said.