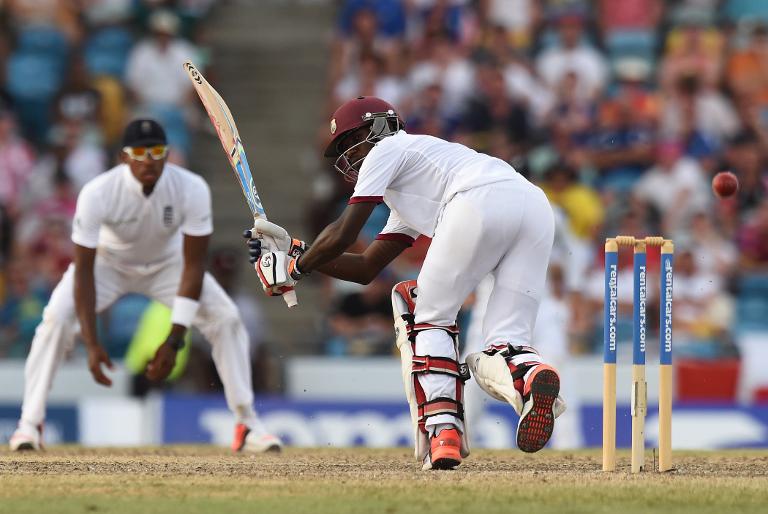 West Indies defied the odds and a wearing pitch to complete a series-levelling five-wicket victory over England on the third day of the third and final Test on Sunday.

Set a daunting target of 192 after the tourists were dismissed for 123 in their second innings, a 108-run fifth-wicket partnership between Darren Bravo and Jermaine Blackwood tilted the match decisively the Caribbean side’s way.

That allowed them to celebrate their first victory over England since the opening match of the 2009 series in Kingston, Jamaica.

Bravo’s controlled knock of 82, his 11th Test half-century, ended when he attempted to make the victory hit off Ben Stokes as Stuart Broad pulled down the catch at mid-off.

It was left to Blackwood to finish off the match in the next over, hoisting Moeen Ali’s off-spin over long-on to finish unbeaten on 47 and complete a team and personal triumph following his first innings top score of 85 out of a total of 189.

He was named man of the match.

“I always try to play my natural game but you have to be mindful of the situation as well,” said Blackwood.

“(Darren) Bravo told me to just keep positive and we would be able to bring it home.”

West Indies seemed on the verge of another capitulation when veteran Shivnarine Chanderpaul played on to James Anderson without scoring to leave the home side uncomfortably placed at 80 for four just after tea.

Anderson took the man of the series honours for his 17 wickets in the three matches, lifting his overall Test tally to 397.

“It’s disappointing, but they chased down that target very well,” he said.

Blackwood, who replaced Chanderpaul, capitalised on a significant moment of luck -â€“ a missed stumping by wicketkeeper Jos Buttler off Joe Root when only on four -â€“ to stay with his senior partner.

Gradually they wore down the England bowlers before unfurling the attacking shots that sped the West Indies to the target that seemed beyond them at the start of the chase given the state of the pitch and the low-scoring nature of the match.

“Anything over 220 would have been trickier, but we had a real belief in our team in this series.”

Openers Kraigg Brathwaite and Shai Hope saw off the early assault from Anderson and Broad, although not without a few anxious moments.

But the introduction of Chris Jordan into the attack brought the breakthrough that England craved as the debutant fell leg-before for nine.

In the very next over, Jordan’s brilliance at slip throughout the series was again in evidence as he held on to a sharp chance left-handed to remove Brathwaite off Ali’s off-spin for 25.

England had started the day brightly, putting on 51 in the first hour for the loss of just one wicket from a perilous overnight position of 39 for five.

Gary Ballance was that early casualty after England resumed in the perilous overnight position of 39 for five.

He became the first of two wickets for Veerasammy Permaul, the left-arm spinner removing the left-hander to a catch at slip and then breaking a 33-run seventh-wicket partnership between Stokes and Buttler via a miscued drive from Stokes (32) that was well held by Chanderpaul at short extra-cover.

Buttler kept on playing positively and was left unbeaten on a top score of 35.

Fast-medium bowler Jason Holder, who dismissed Jordan and Broad off successive deliveries, finished with the best figures of three for 15.

“Getting dismissed for 123 in the second innings opened up the match this morning,” England captain Alastair Cook conceded.

“Defending 190-odd, you need to take every chance and we didn’t do that. We’ll have to take it on the chin because we didn’t do enough to win the series.”

England won the second Test in Grenada by nine wickets while the opening game of the three-match series in Antigua was drawn.