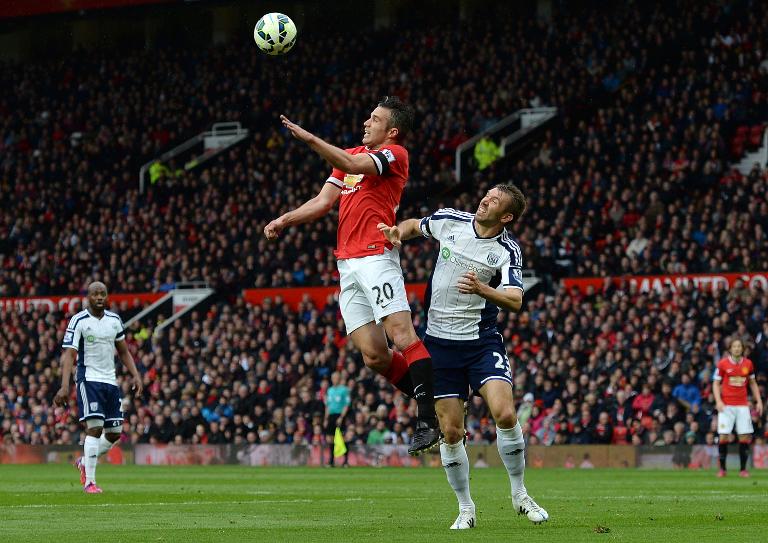 It meant that United, who had 80 percent of possession, fell to a third consecutive Premier League defeat for the first time since December 2001, following previous losses at Chelsea and Everton.

“We knew in advance that they’d park the bus. We have to deal with that,” United manager Louis van Gaal told Sky Sports. “In the second half we had enough chances. You have to finish.”

Victory would have provisionally taken Van Gaal’s side into second place, but they were left two points below both Manchester City and Arsenal, having played a game more than the former and two more than the latter.

With only three games left to play, it leaves United facing the prospect of a fourth-place finish, which would oblige them to enter next season’s Champions League in the play-off round.

But midfielder Juan Mata warned: “We know that Liverpool and more teams are coming from behind, so we need more points as soon as possible.”

Having not won at Old Trafford since 1978 prior to last season, West Brom have now triumphed on their last two visits, with the latest success effectively rubber-stamping their survival.

At the other end of the table, Burnley and Queens Park Rangers were both left on the verge of relegation after narrow defeats.

Bottom club Burnley, promoted last season, lost 1-0 at West Ham United, who prevailed through a 24th-minute Mark Noble penalty after visiting defender Michael Duff had been sent off for a foul on Cheikhou Kouyate.

“The way the team operate, they will give everything and we will continue to do that,” vowed Burnley manager Sean Dyche, whose side are now eight points adrift of safety with only nine points still to play for.

QPR are only a point better off following a 2-1 defeat at Liverpool that took place against a sombre backdrop following the death of Rebecca Ellison, the wife of QPR defender Rio Ferdinand, from breast cancer.

With players from both teams sporting black armbands, Liverpool took a 19th-minute lead through Philippe Coutinho.

Leroy Fer equalised with a volley from a Joey Barton corner in the 73rd minute, before Liverpool captain Steven Gerrard saw a penalty saved by former England colleague Rob Green.

But after Nedum Onuoha was sent off for a second bookable offence, Gerrard atoned for his penalty blunder by heading home an 87th-minute winner to leave Liverpool four points below United.

“It is an extremely difficult time for Rio and his family,” said QPR manager Chris Ramsey. “We would have liked to win today, but thoughts are now with Rio.”

Sunderland moved in the opposite direction to QPR after Jordi Gomez scored two penalties in a 2-1 win at home to Southampton, who replied through Sadio Mane and had James Ward-Prowse sent off.

The victory left Dick Advocaat’s side a point below fourth-bottom Leicester City with a game in hand.

Aston Villa likewise bolstered their chances of avoiding the drop as Christian Benteke took his tally to 11 goals in nine games with a brace in a 3-2 win over Everton.

Tom Cleverley also scored for Villa, with Romelu Lukaku and Phil Jagielka hitting back for Everton, as Tim Sherwood’s side preserved their two-point cushion over the bottom three.

Newcastle finished the game with nine men after defenders Mike Williamson and Daryl Janmaat were both sent off for two bookable offences.

Williamson’s second booking was for a wild touchline lunge on Jamie Vardy and manager John Carver accused the centre-back of being sent off deliberately.

Long-time leaders Chelsea will look to secure the title on Sunday when they host Crystal Palace needing three points to become champions.