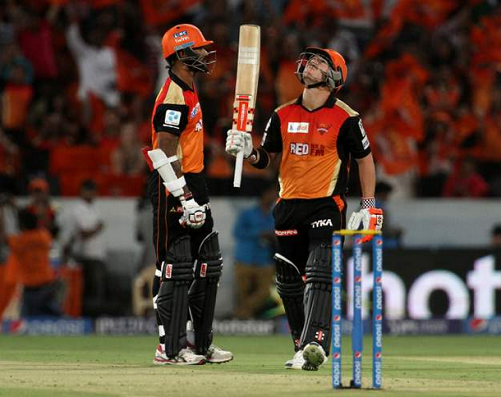 Hyderabad:Â Inspired by Skipper David Warner’s whirlwind fifty, SunRisers Hyderabad outplayed Chennai Super Kings by 22 runs to notch up a much-needed win and hand the table-toppers their second consecutive defeat in the IPL cricket tournament in Hyderabad on Saturday.Â

Warner (378 runs from 8 games) struck from the word go as the left-handed opener hit 11 fours and a six to register his 5th half-century of the tournament and get the orange cap from Rajasthan Royals’ Ajinkya Rahane (339 from 9 matches).Â

Backing their batsmen’s effort, the bowlers also played their part to restrict CSK to 170 for six in 20 overs.Â

Bhuvneshwar Kumar (2-32) drew first blood after the medium-pacer got the dangerous Brendon McCullum (12) to chip an inswinging delivery on to his stumps as the home crowd erupted with joy.Â

Moises Henriques (2-20) then struck in the sixth over to get Dwayne Smith (21) back in the dug out just when the West Indian was looking to set things on fire. The powerful opener hit 3 fours and a six in his 19-ball stay.Â

Henriques continued to make in roads after getting Suresh Raina (23) in his very next over to to hurt the CSK chase. The left-hander, who hasn’t missed a single IPL game since the inaugural edition was looking good after hitting 3 good sixes.Â

Faf du Plessis (33) and skipper Mahendra Singh Dhoni (20) then stitched a 46-run fourth wicket partnership as the chase looked to be back on track. But an unlucky run out saw Faf walk back to the dug out and Dhoni was bowled by medium-pacer Ashish Reddy (1-19) on the very next ball and the crowd came alive.Â

The run was probably the turning point as Dhoni pushed the straight full toss back towards the bowler but hit Faf, then the ball hit the umpire and went to the left of the bowler. Faf thought there was a run there and took off, but by the time he turned around, Reddy had picked the ball up from wide of the crease and hit the stumps.Â

Pawan Negi raised some hopes for CSK with his 11-ball 15 but the ever-increasing asking rate just proved too much for the two-time champions. Negi was bowled by Bhuvneshwar.Â

In the end, Dwayne Bravo managed an unbeaten 20-ball 25 to just reduce the margin of loss in the final few overs.