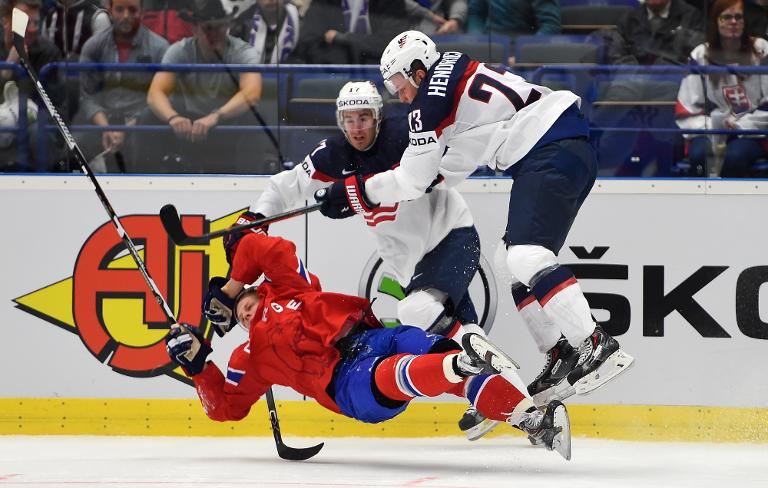 The USA kept a perfect record at the ice hockey world championships after edging Norway 2-1 on Saturday for their second win in as many games.

The young US team outshot their rivals 35-23 to go top of Group B played in the eastern Czech city of Ostrava.

In the other evening game, the Czech Republic beat Latvia 4-2 in Prague to take the top spot in Group A.

The Czechs then scored three power play goals, the second of them courtesy of veteran Florida Panthers wing Jaromir Jagr.

Jagr extended his record as the oldest player ever to score at world championships by a day, to 43 years and 77 days, after having scored against Sweden on Friday.

In the first Group A game on Saturday, underdogs Austria stunned Switzerland 4-3 in a penalty shootout to record their first victory against the 2013 runners-up in 18 years.

Switzerland outshot their rivals 37-25 and led by a goal three times, but Austria always managed to get back on level terms.

Philadelphia Flyers forward Michael Raffl made it 3-3 50 seconds before the end as Austria pulled their goalie and Konstantin Komarek scored the only goal of the shootout, beating Colorado Avalanche goalie Reto Berra in the Swiss goal.

Also in Prague, Germany beat France 2-1 with a power play goal scored by Nuremberg forward Patrick Reimer a minute before the end.

Germany took the lead with a Michael Wolf goal in the 12th minute and held on to it until the 50th minute when Damien Fleury scored for France.

In Group B, Slovakia beat Denmark 4-3 in a shootout, after peppering Danish goalie Patrick Galbraith with 43 shots against 19.

Denmark went ahead 25 minutes into the game and Galbraith kept a clean sheet until the 49th minute when a scoring spree started — Slovakia managed three goals and Denmark one within three minutes.

Denmark made it 3-3 two minutes before the end, but Slovakia were more skilful in the shootout with Columbus Blue Jackets forward Marko Dano beating Galbraith in the sixth round to hand the Slovaks an extra point.

Belarus then overpowered Slovenia 4-2 in the group’s second game of the day.

Three goals between the 10th and 12th minute made it 2-1 for Belarus who extended their lead in the second period.

Slovenia managed to narrow it to a goal in the third and pulled their goalie for a six-on-four power play, but their blunder on the blue line handed Belarus a fourth goal into the empty net.