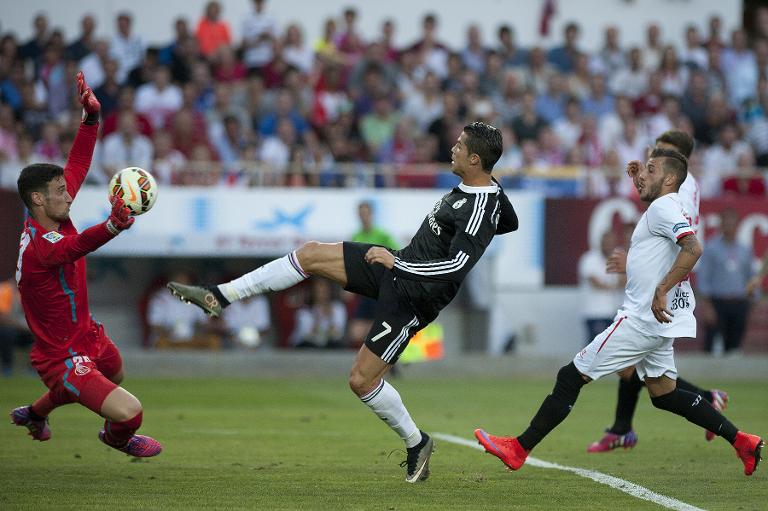 Victory kept the European champions just two points behind Barcelona with three games to play after Luis Suarez scored his first hat-trick for the Catalans in a 8-0 humiliation of relegated Cordoba.

“It was not easy to win here and we have managed it. We are very happy and we keep fighting,” said Real Madrid boss Carlo Ancelotti.

“It is not by coincidence that they haven’t lost for 34 games at this stadium.”

The game swung massively in Madrid’s favour in the space of two first-half minutes whilst Sevilla were down to 10 men as Grzegorz Krychowiak was off the field receiving treatment for a facial injury.

Sevilla were handed a route back into the game when Sergio Ramos upended Vidal inside the area in first-half stoppage time and Carlos Bacca converted from the penalty spot.

Ronaldo looked to have sealed the three points with a stunning header from Gareth Bale’s cross midway through the second-half.

However, Vicente Iborra reduced the deficit once more from as he swept home Vidal’s cross to set up a grandstand finish.

And Madrid’s hearts were in their mouths five minutes from time when Barcelona loanee Denis Suarez’s trickled an attempt inches past the post.

Ronaldo’s 29th Madrid hat-trick took him onto 42 La Liga goals for the campaign, two ahead of Lionel Messi who netted twice as Barca condemned Cordoba to relegation in embarrassing fashion.

Cordoba, who haven’t won since January, held out for 42 minutes, but a four-goal blitz in 11 minutes either side of half-time ended their return to the top flight after just one season.

“Until the first goal we had created a lot of chances and were fearing it wouldn’t be our day,” said Barca boss Luis Enrique.

“The goals from Ivan (Rakitic) and Luis helped us and in the second-half we were very effective in front of goal. I am happy because they are three very important points.”

The league leaders made the breakthrough in style when Messi’s lovely cushioned pass picked out Rakitic and he crashed a shot into the roof of the net.

Suarez made it 2-0 just before the break when he latched onto a similar pass from Andres Iniesta to sneak the ball between Carlos’s legs.

The one way traffic continued after the break as Messi expertly nodded home Dani Alves’s inch-perfect cross just a minute into the second-half.

Alves’s brilliant form in recent weeks has been unimpeded by ongoing speculation over his future as he once more bombed to the right to cross for Suarez to head in his 23rd goal of the season.

Gerard Pique rose unchallenged to head in from Xavi’s corner 25 minutes from time to make it 5-0.

Messi rolled home the sixth into an empty net thanks to unselfish play by Neymar and the four-time World Player of the Year returned the favour by allowing the Brazilian to slot home from the penalty spot after he had been felled by Adrian Gunino.

And Suarez rounded off the scoring by completing his first Barca hat-trick with a simple finish after Xavi’s blocked effort had left the helpless Carlos on the floor.

Elsewhere, Atletico Madrid failed to nail down third place and an automatic return to the Champions League next season as they were held 0-0 at home by Athletic Bilbao.

Atletico had two goals wrongly ruled out for offside after the break through Antoine Griezmann and Tiago as the Basques held on for a point which moves them up to seventh.

Diego Simeone’s men now lead Sevilla and Valencia, who face Eibar on Sunday, by seven points in the battle for the Champions League places.