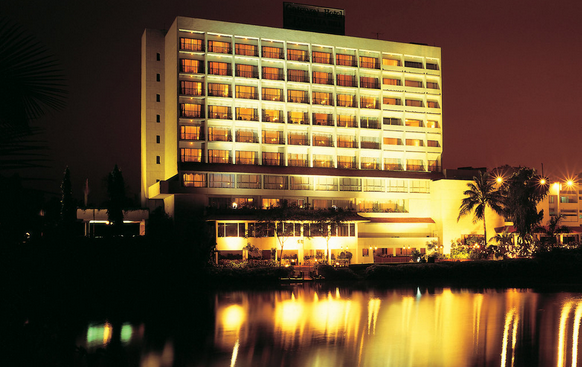 Hyderabad: Taj Banjara is situated in the most bustling and commercially active part of the city â€“ on the posh streets of Banjara Hills. Its Waterside Cafe is the perfect place to go for a 5-star dining experience, overlooking a lake and enjoying the delicacies dished out by its renowned chefs. As soon as you step in, youâ€™re greeted by warm security staff, who usher you into the beige carpeted huge hall that diverges into the several sections that the Taj boasts of.

The Waterside Cafe is a fairly small area, with about 15 tables, which means itâ€™s a place for cozy dinners.

With tastefully done furniture and food accessible from every corner, you donâ€™t need to burn a lot of fat running around with your plates.

This being a dinner buffet and we being vegetarians, we settled for the vegetarian fare. We were served a pulse soup to begin with, a smart version of the traditional Indian Dal Tadka being ground to a bowlful of warm bliss.

The spices hit the right tones and the warmth of the aromas made it a perfect beginning. For starters, there wasnâ€™t too much variety, but that was a great thing, because too many starters kill the appetite instead of arousing it.

There was honey chilli potato and corn tikki. They tasted great, but the only niggles were the fact that the tikkis had become soggy because they were kept under a lid and the potatoes were chopped in random shapes.

The live counter had a smiling chef who dished out some wonderful tasting crepes, spiced up with vegetables sauteed in red sauce. With a plateful washed down with sips of aerated drinks, we began preparing for our main course. We had butter nan, accompanied by freshly made paneer in a rich cashew-tomato gravy, a mixed vegetable and corn and spinach corn au gratin, a gravy with white sauce with sinful amounts of cheese.

We also tucked in vegetable fried rice with vegetables in hot and sour gravy as a part of the Chinese fare. The flavours were perfectly balanced, so kudos to the chef!

Then came the part weâ€™d been waiting for. With close to 16 desserts to be devoured, we began digging in. Chocolate cake, pineapple cake, papaya tart, chickoo flavoured yoghurt, apricot pudding, malpua, caramel custard were some of the desserts that we tasted.

There was a range of salads available too, but we didnâ€™t venture that side.

Priced at over Rs 1260, this might be slightly over the budget for many. However, the dining experience was worth the money spent. The menu wasnâ€™t too long, but thatâ€™s the best part. Unlike many buffets, we managed to taste almost all the dishes. The service was warm too.