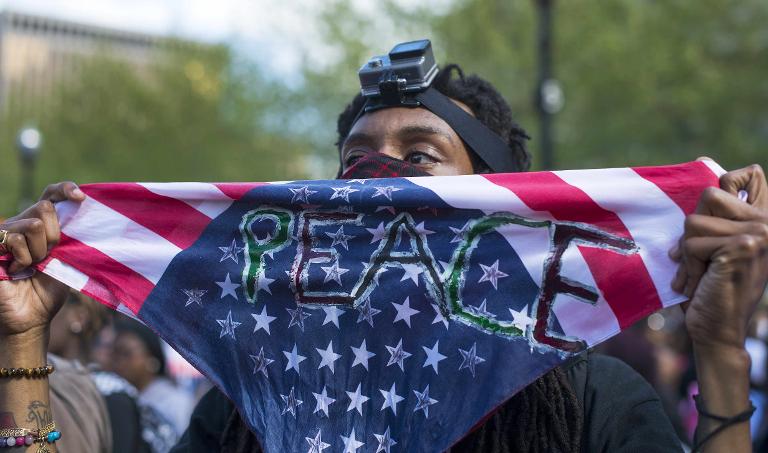 Hundreds of protesters broke the city of Baltimore’s curfew and several were arrested, a day after six police officers were charged over the death of an African-American man in their custody.

Police in riot gear met crowds of demonstrators as the 10:00 pm to 5:00 am order to stay indoors went into effect.

Despite the curfew arrests that included scuffles with police, tension has subsided considerably in the city. Baltimore has seen days of protests over alleged police racism and excessive force following the death of 25-year-old Freddie Gray who was in police custody.

A spontaneous street party of thousands of people erupted in Baltimore during the day Saturday a day after charges were announced against the officers involved in Gray’s arrest.

People marching, singing and dancing in the streets cheered the surprise charges of the officers — three of them black. They face a range of charges, including second-degree murder and manslaughter.

“My hope is that we work towards a new level of partnership in all parts of our community as we move forward.”

The Maryland National Guard said on Twitter it had nearly 3,000 soldiers and airmen ready to help “keep the peace” in the city.

But in contrast to the violence and looting that flared after Gray’s funeral on Monday, there was a festive atmosphere in Baltimore, as demonstrators — white and black — gathered at City Hall, the focal point of rallies in recent days.

“I am so inspired and encouraged by what I see,” Mayor Stephanie Rawlings-Blake told CBS television affiliate WJZ.

“I think that there’s a lot of hope that in peace we can seek justice.”

After the rally, protesters marched toward the neighborhood where Gray was arrested on April 12. He died a week later from his injuries.

“Whose streets? Our streets!” they chanted.

The death of Gray at the hands of police has reignited simmering resentment in the United States over law enforcement tactics, particularly in their dealings with African Americans.

In video recorded of the incident in Baltimore, Gray appeared to be in pain as he was hustled into a police van. He died seven days later with 80 percent of his spine severed at the neck, lawyers for his family have said.

Demonstrations have erupted daily in Baltimore this week over the death.

There have also been rallies in many other major American cities, including New York, Philadelphia and the capital Washington, in echoes of the protests that broke out across the United States last year over the fatal police shooting of an unarmed black teenager in Ferguson, Missouri.

In recent months a string of killings of unarmed African American men by the police have ignited protests across the country.

The medical examiner found that Gray’s death was a homicide.

That determination, along with the findings of an independent investigation “have led us to believe that we have probable cause to file criminal charges,” Maryland state prosecutor Marilyn Mosby announced Friday.

Mosby said Gray “suffered a severe and critical neck injury as a result of being handcuffed, shackled by his feet and unrestrained” inside a moving police van following his arrest.

Mosby — an African-American woman who is the daughter, granddaughter and niece of police officers — said Gray had been “illegally arrested” as “no crime had been committed.”

Baltimore’s police union condemned what it called “an egregious rush to judgment,” as it defended the officers and expressed confidence they would be cleared.

While some expressed relief that the police officers had been charged, others cautioned that it was only the first step in a process that once again casts a damning spotlight on race relations in the United States.

Lawyer and activist Malik Shabazz pressed Mosby: “don’t (back) off” as he addressed a calm, mostly young, crowd under sunny spring skies.

He led demonstrators in a chant of “No justice, no peace!”

Shabazz also urged Maryland Governor Bob Hogan to end the curfew in Baltimore, which business owners say is hurting them seriously, and to order out National Guard troops.

“I ask respectfully, Governor Hogan, back up your troops,” he said.

Maryland’s branch of the ACLU, the largest US civil rights organization, also said “the curfew no longer serves its intended purpose,” in a statement.