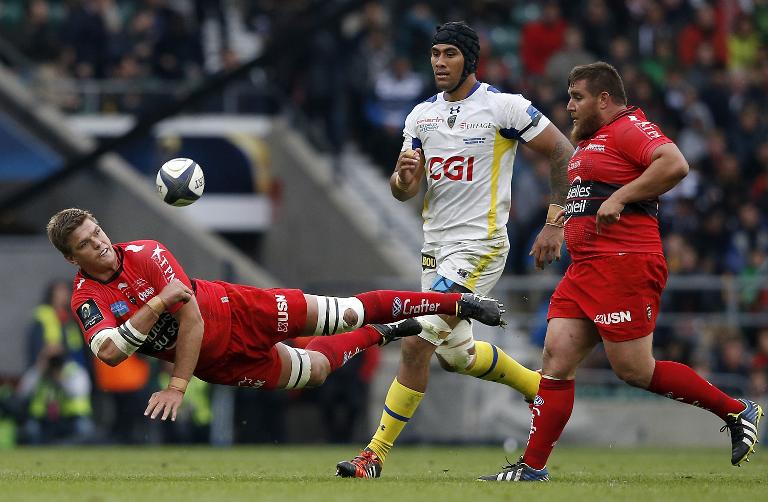 Mitchell went past six defenders in a warning to England, who could be up against the flying wing in a World Cup pool match this year after Australia recently relaxed their rules on selecting overseas-based players for Test duty.

Toulon and New Zealand lock Ali Williams told Sky Sports afterwards that he had “never loved an Australian as much as I loved Drew Mitchell when he scored that try”.

Clermont were 11-3 up midway through the first half but Leigh Halfpenny’s remorseless boot and a converted try by Mathieu Bastareaud saw Toulon into a 16-11 lead at the break.

Nick Abendanon’s converted try for Clermont just after the hour cut Toulon’s lead to a point only for Mitchell to have the last word.

“It is a tough one to swallow at the moment,” said Clermont centre Jonathan Davies, a Wales team-mate of Halfpenny.

“Our discipline cost us at times and we fell off some tackles.”

Clermont had a setback shortly before the match started when Australian fly-half Brock James suffered a thigh injury in the warm-up and was ruled out.

But such is their strength in depth, his place was taken by France international Camille Lopez.

Toulon kicked off with four World Cup-winners in their side in Williams and the South African trio of Bryan Habana, Bakkies Botha and Juan Smith.

Up front, however, Clermont’s initial dominance at the scrum led to two penalties, both kicked by Lopez before Halfpenny hit back.

However, it was Clermont who scored the first try in the 25th minute.

Clermont’s Morgan Parra charged down a kick off the back of a ruck by opposing scrum-half Sebastien Tillous-Borde and France centre Wesley Fofana gathered the loose ball and ran in unopposed before diving over flamboyantly for a try in the left corner.

Lopez missed the difficult conversion but Clermont were still 11-3 up, before two more Halfpenny penalties cut their lead to just two points.

Halfpenny then, surprisingly, missed a 45-metre effort from wide on the right.

However, Toulon hit Clermont with a sucker-punch try on the stroke of half-time.

A blindside break from a ruck saw the ball moved quickly left to Bastareaud, with the France centre powering through a gap between prop Davit Zirakashvili and wing Noa Nakaitaci.

Halfpenny, underlining his status as one of the world’s top goalkickers, made light of the tricky conversion and Toulon, who had been eight points down, instead led 16-11 at the break.

They nearly had a second try early in the second half when back-row forward Steffon Armitage bounced off full-back Abendanon, his fellow England exile.

Armitage found Matt Giteau but the Australian fly-half, filling the gap left by the retired Jonny Wilkinson, saw his back-of-the-hand pass fly into touch as he was hauled down with Mitchell and Halfpenny outside him.

But Nakaitaci then gifted Toulon a penalty when, after making a mess of gathering the ball, he deliberately threw the ball into touch.

It seemed as if Clermont’s handling errors and a series of Armitage turnovers, would deny them the try they needed.

But just after the hour mark, Abendanon chipped the ball over the top of the defence and regathered to score under the posts.

Lopez converted and Toulon were now just a point in front at 19-18.

However, Toulon came within inches of another try when Williams lost control just in the act of going over in the corner.

But, with 11 minutes remaining, Mitchell’s class claimed the title.

Receiving the ball at pace on Clermont’s 10-metre line, he sidestepped several would-be defenders in a slalom run for a brilliant solo score.

Halfpenny missed the conversion and Clermont still had hope but there was to be no revenge for their 2013 European final defeat by Toulon.