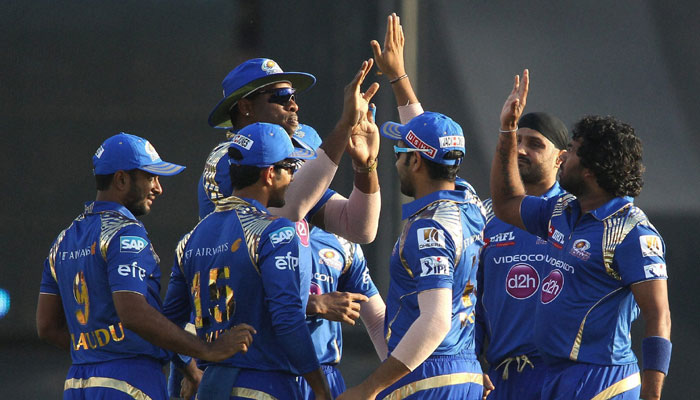 After scoring a healthy 172 for three in 20 overs, Mumbai Indians restricted an out-of-sorts KXIP for 149 for seven in their home ground in front of packed stands as it may well be curtains for last year’s finalists.Â Senior pros Lasith Malinga (2/31) and Harbhajan Singh (1/27) led a disciplined bowling attack and were complemented well by Mitchell McClenaghan (0/25 in 4 overs) and R Vinay Kumar (0/17 in 3 overs) who also kept the KXIP batsman under check.

Once David Miller (43) was snapped by Rohit Sharma off Malinga in the 17th over, the match was as good as over for the KXIP. Miller’s 37 ball innings had three fours and a six.Â Murali Vijay (39) also tried his bit before being holed out by Unmukt Chand off Harbhajan in the deep.Â However it was failure of Virender Sehwag (2) and Glenn Maxwell (12) that hurt KXIP badly. Sehwag was again done in by a fuller delivery by Malinga to which he closed his bat face and Pollard at point took simplest of catches.

Skipper George Bailey also looked completely out of sorts during his 18-ball-21 as he struggled to hit the big shots and was eventuallyrun-out.Â Earlier, a 111-run opening stand between Parthiv Patel (59) and Lendl Simmons (71) ensured a total of 172 for 3 for Mumbai Indians after Rohit Sharma opted to bat against KXIP.Â However MI’s total seemed to be 20 runs short as they managed only 76 runs in the back 10 after Parthiv and Simmons had added 96 in the first 10 overs.

Top-scorer Simmons’ 71 came off 56 balls that included nine boundaries and a six. He fell in the last over when Axar Patel caught him in the deep off Anureet Singh’s bowling.Â Parthiv provided the initial impetus to the innings batting freely. His knock of 59 came in just 36 balls with five boundaries and three big sixes.

Leg spinner Karanveer Singh gave KXIP first breakthrough to Punjab when he had Patel caught by Murali Vijay in the 13th over.Â At the onset, Simmons made the team’s intentions clear when he hit two consecutive boundaries in the innings’ first over bowled by Sandeep Sharma.

Both the openers cut loose and hammered the KXIP bowlers at will. With pacer Mitchell Johnson struggling in this edition, he proved costly in his very first over giving away 18 runs, with Parthiv hitting him for a six and two boundaries of the Aussie.

The former India glovesman looked more aggressive of the opening duo, with West Indian Simmons playing the role of an anchor. However, when the left-hander departed, he hit some lusty blows including a straight six over the bowler Axar Patel’s head.

KXIP skipper George Bailey used as many as seven bowlers including Murali Vijay. The hosts also had a few slip-ups in the field that included a dropped catch by Sehwag off Rohit Sharma when he was batting on 22, even though the Mumbai skipper later fell soon adding just four more runs to his individual score.