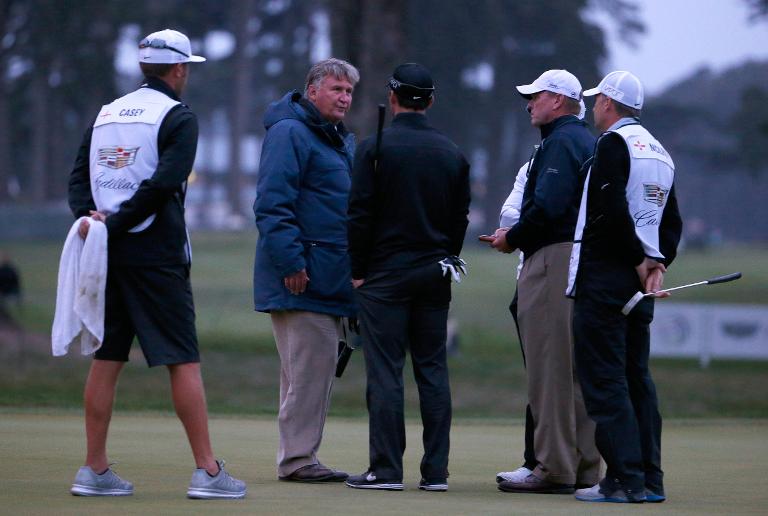 World number one Rory McIlroy and England’s Paul Casey battled to a standstill in the $9.25 million WGC-Championship Match Play in California Saturday and face a dawn start to resume their match for a place in the last four.

In near-darkness at Harding Park, the two European stars finished all square after 21 holes and will continue their sudden death battle on Sunday morning at 6:45 am.

“I dodged a couple of bullets but I gave him a couple too,” Casey said. “I’m glad we’re coming back tomorrow, I thought that was it for the day and the week,” he added referring to McIlroy’s missed putt.

McIlroy was left ruing his inability to close out the win.

“It was good, it was back and forth,” he said. “I had a couple of opportunities to close it out but I couldn’t quite convert.

“It was getting pretty dark so we’ll come back in the morning and try again.”

McIlroy, superb in a 6&5 thrashing of Hideki Matsuyama in the last 16, started his quarter-final as he had finished the previous round, claiming a birdie on the first to go one up.

But Casey hit back with three birdies of his own on the front nine to go two up at the turn.

McIlroy slowly hauled himself back into contention, draining a 20-foot birdie putt on the 10th to reduce Casey’s lead.

A bogey by Casey on the par-three 13th put the match all square but then McIlroy’s first bogey of the day handed the initiative back to his opponent on 14.

After halving the par-four 15th, McIlroy looked to be poised to cancel out Casey’s lead as he prepared for a five-foot birdie putt.

Casey however coolly rolled in a difficult putt for birdie from just off the green to cling on to his lead with two holes left.

But the Englishman’s luck ran out on the 17th as McIlroy punished a jittery putting display by his opponent.

McIlroy chipped from heavy rough to five feet to put the pressure on Casey, who then over hit a long putt from the collar several feet past the hole before two putting.

Both players found the rough off the tee on the par-five 18th, and McIlroy was unable to find the green with his second which landed just shy of a bunker.

McIlroy’s effort also missed, however, taking the match to the sudden death stalemate.

The winner of the quarter-final will face fifth-ranked Jim Furyk in the semi-finals. Furyk produced a sparkling performance on the back nine to defeat Louis Oosthuizen of South Africa 4&2.

Oosthuizen had led by one hole at the turn, but four birdies in the next seven holes by Furyk saw him wrap up a comfortable win.

In Sunday’s other semi-final, England’s Danny Willett, ranked 49, will face Gary Woodland of the United States, the world number 52.

Willett upset English veteran Lee Westwood in the last 16 before going on to down compatriot Tommy Fleetwood in another all-English duel in the quarter-finals.

Willett advanced to the last four after shooting four birdies and two bogeys to win 4&3.