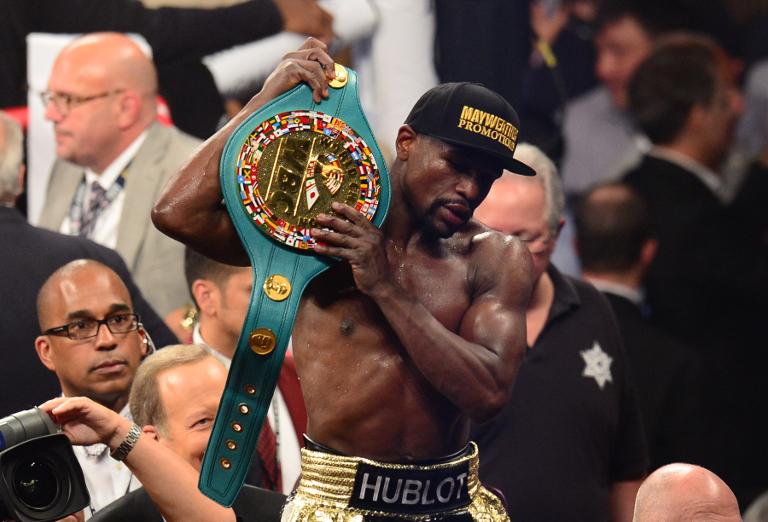 Fifty is a nice round number, but it can’t compare to the nine figures on the check Floyd Mayweather collected after beating Manny Pacquiao on Saturday.

“For my team to hand me a $100 million check is remarkable,” said Mayweather, whose take from the long-awaited mega-fight with Pacquiao could eventually swell to as high as $200 million once all the record-breaking revenue is counted.

The man who has named himself “Money” said the payout was all part of a “brilliant game plan” for his career.

“My goal was to make nine figures in one night,” he said.

The 38-year-old American, an 11-time world champion in five weight divisions, would have you believe that aim has been the driving force of a 19-year career, in which he’s now won all 48 of his fights.

Even as the clash with Pacquiao loomed — sparking massive global interest — Mayweather was saying he was on his way out — with just one more bout to come once he’d finally crossed Pacquiao off his to-do list.

“Everyone’s been saying for years that I was scared and I would lose,” Mayweather said of five-years of finger-pointing as he and Pacquiao failed to get together.

The passion’s fading, Mayweather says, and only a desire to keep his word and fulfill his six-fight Showtime contract will see him fight again in September.

But a win in that fight would take his record to 49-0, matching the iconic mark of Rocky Marciano.

Could he then really resist going for a 50th victory?

“My last fight is in September, and then it’s time for me to hang it up,” the 38-year-old said.

Mayweather said his last fight might not even be a world title contest.

“My last fight may not be a championship fight,” he said. “I might give up all my belts.”

“Why? Give other fighters a chance. I’m not greedy.”