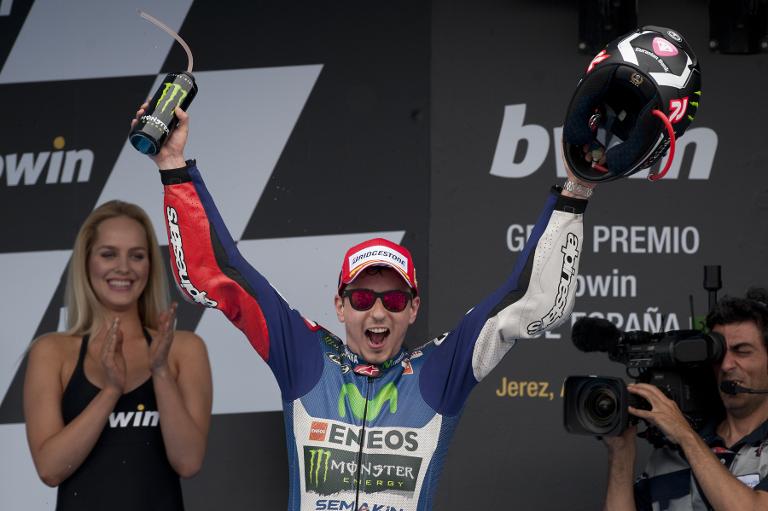 Jorge Lorenzo celebrated being kept on by Yamaha for next season by winning the Spanish MotoGP at Jerez on Sunday in commanding style to also give himself a special present on the eve of his 28th birthday.

The two-time world champion, winning his first MotoGP since the Japanese one last year, came home well clear of world champion Marc Marquez on a Honda delivering a perfect result for former Spanish King Juan Carlos, who was watching from the stands along with 120,000 other spectators.

Indeed the former King — a noted motorbike rider and enthusiast in his younger days — presented the prizes.

Marquez, who rode here despite a broken pinky finger on his left hand, held off Italian legend and series leader Valentino Rossi, who had the consolation of becoming the first rider to achieve the 200 podium mark — 15-time world champion and fellow Italian Giacomo Agostini, who was watching from the pits, is next best with 159.

Rossi retains the lead in the overall standings, he has 82 points after four races, a 15 point lead over Andrea Dovizioso with Lorenzo and Marquez 20 and 26 points adrift respectively of him.

Lorenzo, who was winning his 34th race in the category and 55th in all classes, said it had been a perfect weekend but didn’t want to speculate as to what this meant for the title race.

“We’ll enjoy this for the moment,” he said.

“It was an impressive win and I felt very good on the bike.

“It is an extra special win after a long time of waiting.

“Today I could take advantage of my impressive pace and talent.”

Marquez for his part said it had been one of the most difficult races of his career.

“Yes it definitely was tough, not so much my finger but because I felt great pain in my right arm,” said Marquez.

“At one point I couldn’t move my fingers so to be second here is important.”

Rossi, who had won two of the three races coming into the Spanish MotoGP, said he hadn’t felt comfortable throughout the weekend.

“I try and try and try to get up to Marc but my speed wasn’t great and then my front wheel started to be unreliable so I eased up,” said the 36-year-old Rossi.

Rossi made a good start moving from sixth to fourth, in stark contrast to compatriot Andrea Iannone who paid for fiddling with his clutch on the start line and dropped from the front row to ninth — while another Italian, Andrea Dovizioso, went into the gravel and slipped from eighth to last although he was to recover and finish in the top 10.

Lorenzo had no such problems getting away with Marquez on his tail, with Rossi moving into third with 24 laps remaining.

The order remained the same, with neither Marquez — whose Honda team had modified the handlebar to facilitate his broken pinky finger — nor Rossi able to challenge Lorenzo.

With just over half of the race gone, the leading trio maintained their positions with Marquez seemingly holding Rossi off with ease.

However, with 10 laps remaining the irrepressible Italian then began to make his move and began eating into the world champion’s advantage over him.

An enthralling battle continued — with Lorenzo safe as houses out in front — as initially Rossi looked odds on to overcome Marquez before the young Spaniard fought back and halted Rossi’s progress.