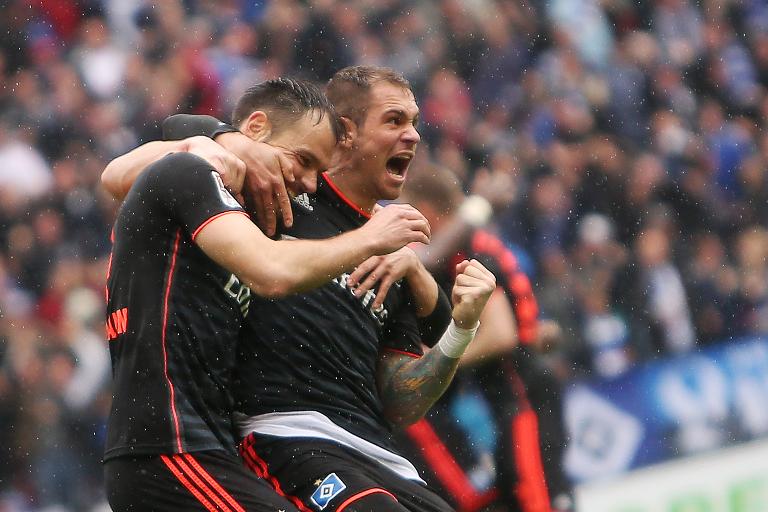 Hamburg escaped the relegation places for the first time since March on Sunday after Gojko Kacar’s last-gasp goal sealed a 2-1 win at ten-man Mainz.

Hamburg were gifted a first-half lead thanks to an own goal when Heiko Westermann’s cross clipped Mainz’s Julian Baumgartlinger and flew into the net on 37 minutes.

Mainz threatened to equalise after the break when South Korea international Joo Ja-Cheol hit the post after some good work by Japan striker Shinji Okazaki on 69 minutes just before the hosts drew level.

But Hamburg’s Serbian international Kacar, who is out of contract at the end of the season, slammed home his shot from just outside the area with 87 minutes gone to give the visitors the three points.

Mainz were reduced to ten men on 90 minutes when defender Daniel Brosinski was shown a straight red card for fouling Artjoms Rudnevs who was through on goal.

Hamburg are battling to avoid a first relegation as they are the only side in Germany’s top flight never to have previously gone down and the win drags them up to 14th while Mainz stay tenth.

Neuer went into the game seeking one more clean sheet to beat Oliver Kahn’s record of 19 Bayern games in a season without conceding a goal.

But Bayern soon regretted fielding a weakened side as they prepare for a Champions League semi-final on Wednesday against Barcelona.

Leverkusen’s Turkish international Hakan Calhanoglu fired a direct free kick from 25 metres through the Bayern wall and past Neuer.

In the second half, Karim Bellarabi tore through the Bayern defence in a brilliant length of the field run before passing to Julian Brandt who claimed an easy goal on his 19th birthday.

The result was a new disappointment for Bayern after their midweek loss in the German Cup semi-final, but coach Pep Guardiola already has the Bundesliga title wrapped up and rested key players for the Champions League campaign.

The 2-0 win took Leverkusen, now unbeaten in 10 league games, into third place one point ahead of Borussia Moenchengladbach and into one of the three automatic qualifying places for next season’s Champions League before Gladbach play at Hertha Berlin later on Sunday.

Wolves’ German Cup final opponents Borussia Dortmund also drew 1-1 at Hoffenheim with both sides chasing a Europa League spot for next season, but stay just outside the top six.

Fifth place Schalke secured their first win since March with a 3-2 against VfB Stuttgart to keep them on course for next season’s Europa League.