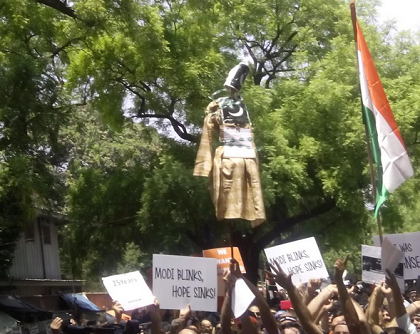 New Delhi:Â Kashmiri Pandits on Sunday staged a protest here demanding that the state and the Centre take the community members into confidence before any decision on their return to the Valley and also pressed for setting up a commission to probe the “genocide” which led to their exodus.Â

Members of the community, who converged in large numbers at Jantar Mantar in the national capital, demanded that Jammu and Kashmir government reopen prosecution cases against all those involved in the killing of Kashmiri pandits in the Valley following the outbreak of militancy.Â

Many of the protesters, who were wearing black T-shirts and bands, shouted slogans against Hurriyat Conference and separatist leaders.Â

The general secretary of Jammu Kashmir Vichar Manch, Manoj Bhan, said, “Whatever decision the Centre or the state government takes, they must talk to the Kashmiri Pandits first. No separatist should be allowed to intervene in matters relating to Kashmiri Pandits.”Â

They also called for setting up of a commission of inquiry to pin-point responsibility on perpetrators of “genocide” against them.Â

Disapproving of comments made earlier by Chief Minister Mufti Mohammad Sayeed that only 10 to 15 per cent Kashmiri Pandits will choose to return to the Valley as most are well placed in various parts of the country, Bhan said that every member of the community wants to return to their homeland.Â

CBFC board member Ashoke Pandit, who had flown in from Mumbai to participate in the protest, said that the Centre believing the words of Sayeed was the biggest problem for Kashmiri Pandits.Â

“When I see all the terrorists on the streets of Kashmir, then what is the difference between the previous and this central government. The biggest problem is that the central government is trusting the Chief Minister….Who says he is thankful to Pakistan after the peaceful elections,” Pandit said.Â

He also demanded that Syed Ali Shah Geelani, Yasin Malik and other separatist leaders be arrested.Â

Some of the placards carried by protesters also demanded that Article 370 which gives special status to Jammu and Kashmir be abolished.Â

Another protester, Pankaj Dhar, said that members want to go to their homeland but on their terms and authorities must ensure social and political security of those who return.