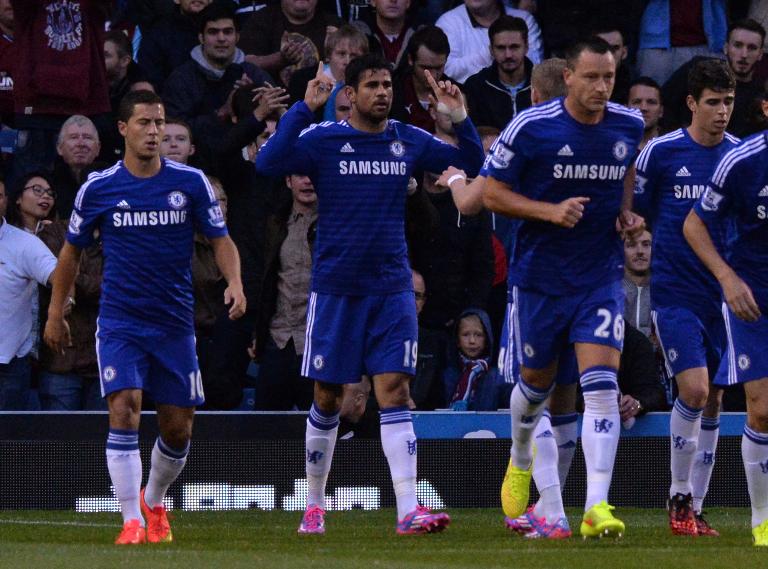 Chelsea were crowned Premier League champions on Sunday following a 1-0 home win over Crystal Palace, ending a five-year wait for the title.

Here, AFP Sport takes a month-by-month look at how Jose Mourinho’s team swept to the title.

After falling behind just 14 minutes into their first game of the season at promoted Burnley, Mourinho’s men responded with a three-goal blast, including a debut strike from Spain striker Diego Costa, which foreshadowed their dominant campaign. The high point of the opening weeks was a scintillating 6-3 win at Everton that left the free-scoring Blues in first place. Champions Manchester City embarked on their title defence in the erratic fashion that would come to define their season, brushing aside Liverpool 3-1, then crashing 1-0 at home to Stoke City.

Costa’s blistering start included a hat-trick in a 4-2 rout of previously unbeaten Swansea City and even a late equaliser from former Chelsea stalwart Frank Lampard, ending the leaders’ 100 percent record in a 1-1 draw at Manchester City, could not dent Chelsea’s momentum. They ended the month with a three-point lead. Liverpool, last season’s runners-up, were already nine points off the pace after successive defeats against Aston Villa and West Ham United.

Mourinho extended his mastery over old rival Arsene Wenger as Arsenal were dismissed 2-0 at Stamford Bridge, although he was unable to conquer his former mentor Louis van Gaal, who employed the Portuguese as an assistant at Barcelona, as Manchester United’s Robin van Persie struck late in a 1-1 draw at Old Trafford. City’s latest slip, 2-1 at West Ham, left surprise package Southampton in second place, four points behind Chelsea.

Any questions over Chelsea’s stomach for the title fight were emphatically answered as they came from a goal down to silence the hostile Anfield crowd in a 2-1 win at Liverpool. The Blues failed to score for the first time in a 0-0 draw at Sunderland, but they were still unbeaten in 13 matches and well ahead of City, who had hit form with a 1-0 win against United in the Manchester derby and a 3-0 victory at Southampton.

A Papiss Cisse double brought Chelsea’s 15-match unbeaten run to an end in a 2-1 loss at Newcastle United. But Hull City, Stoke and West Ham were all beaten without the concession of a single goal to ensure the west Londoners finished 2014 in pole position, three points ahead of City, who had reeled off five consecutive victories. There were no signs that inconsistent Arsenal would eventually rise into the top two, with a 3-2 defeat at Stoke prompting a minority of fans to call for Wenger’s dismissal.

A 5-3 defeat at Tottenham Hotspur left Chelsea with a new year hangover that allowed City to draw dead-level at the top of the table (on points, goal difference and goals scored). But Mourinho’s men had the perfect cure: a ruthless 5-0 demolition of Swansea, coinciding with City’s 2-0 home defeat against Arsenal. Those results meant that Chelsea had a five-point lead over City by the time they arrived at the Bridge for a summit meeting that produced an anti-climatic 1-1 draw.

After sweeping through the first half of the season in swashbuckling style, Chelsea were showing signs of fatigue as injuries and suspensions took their toll. Narrow wins over Aston Villa and Everton kept the Blues in top spot, but Mourinho was quick to adopt a siege mentality, complaining of a conspiracy against his team after Nemanja Matic’s controversial red card helped struggling Burnley draw 1-1 against the leaders. City thrashed Stoke and Newcastle, but a draw against lowly Hull had already further undermined their challenge.

Hampered by the injury problems of leading scorer Costa, Mourinho began to favour a cautious style that led some critics to label the Blues ‘boring’. But the results supported Mourinho’s move and the wild celebrations that greeted Loic Remy’s late goal in a 3-2 victory at Hull suggested his players were more than happy to follow their manager’s lead. Lacklustre defeats at Liverpool and Burnley left fading City six points behind Chelsea, while Arsenal, buoyed by four successive wins, were making a late bid to catch the leaders.

Mourinho’s side overcame one of their final remaining obstacles when Eden Hazard’s cool finish secured a 1-0 victory against Manchester United. City had completely imploded by now, losing against Crystal Palace and United to leave in-form Arsenal in second place. But even the Gunners’ lengthy winning run could not eat into Chelsea’s advantage as the Blues ground out a 0-0 draw at the Emirates Stadium before a 3-1 win at Leicester left them on the brink of their first league title since 2010.

Chelsea secured the title with three matches to spare by beating Crystal Palace 1-0 in front of their jubilant fans at the Bridge.