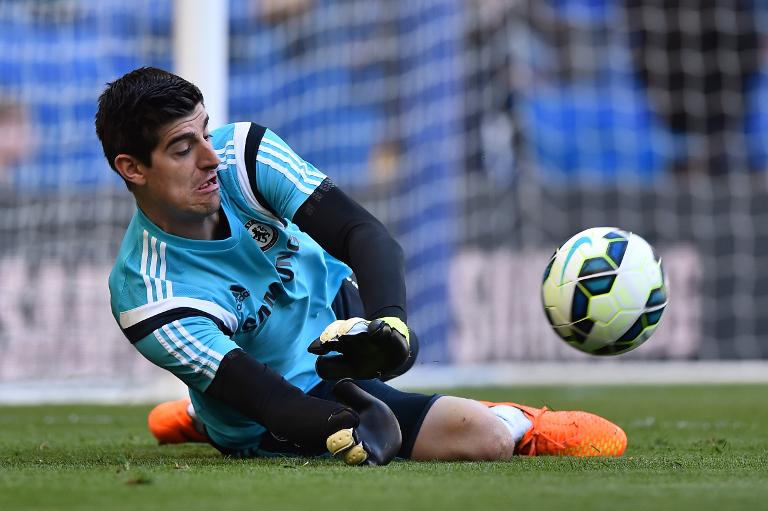 Having already tasted glory in the League Cup, Chelsea claimed the Premier League title after winning 1-0 at home to Crystal Palace on Sunday.

Courtois was not guaranteed a starting berth when he belatedly arrived at Stamford Bridge last year following a three-season loan spell at Atletico Madrid, but he immediately supplanted Petr Cech in the starting XI and has not looked back. The 22-year-old Belgium international’s performances have confirmed his status as one of the world’s leading goalkeepers, with Mourinho describing him as “phenomenal” after he produced a succession of vital stops during Chelsea’s 1-1 draw at Paris Saint-Germain in the Champions League.

Two and a half years on from his international retirement, Terry remains the outstanding centre-back in the Premier League and with Cech losing his place and both Frank Lampard and Ashley Cole having left the club, he is now the only survivor from Mourinho’s first stint at Chelsea who still commands a first-team place. Terry, 34, is one of only five outfield players in the Premier League — including team-mate Branislav Ivanovic — who have appeared in every minute of their teams’ matches this season and he has helped Chelsea register a league-high 17 clean sheets.

The sight of Fabregas in a blue shirt was one of the great novelties of the season’s early weeks — particularly for fans of his former club Arsenal — but since creating a goal for Andre Schuerrle with a gloriously deft pass in a 3-1 win at Burnley on the opening weekend, he has looked perfectly at home. Afforded licence to roam and time to pick his passes by muscular midfield colleague Nemanja Matic, the Spain international has amassed 17 assists — a figure better only by Barcelona great Lionel Messi (18) and Wolfsburg’s Chelsea old boy Kevin De Bruyne (19) in Europe’s five major leagues.

With 14 goals and eight assists, Hazard has emerged this season as the league’s most influential attacking player and was elected Player of the Year by his peers in the Professional Footballers’ Association (PFA) awards. The 24-year-old Belgian forward has added positional discipline to his game and become even more effective in the final third of the pitch, culminating in a string of man-of-the-match displays and important goals against Queens Park Rangers, Southampton, West Ham United and Manchester United, plus the title-sealing win over Crystal Palace.

Mourinho complained long and loud about Chelsea’s lack of proven goal-scorers last season and with the arrival of snarling Brazil-born Spain international Costa from Atletico, his prayers were answered. Costa’s debut campaign in England has been far from plain sailing, with a succession of hamstring problems and a three-game ban for stamping on Liverpool’s Martin Skrtel in the League Cup semi-finals, as well as accusations of diving and antagonistic behaviour. But his 19 league goals — seven of which were scored in his first four games — pay testament to his impact.