Fight of the century ready to rumble | Newsmobile
Sunday, June 26, 2022

Home Sports Fight of the century ready to rumble 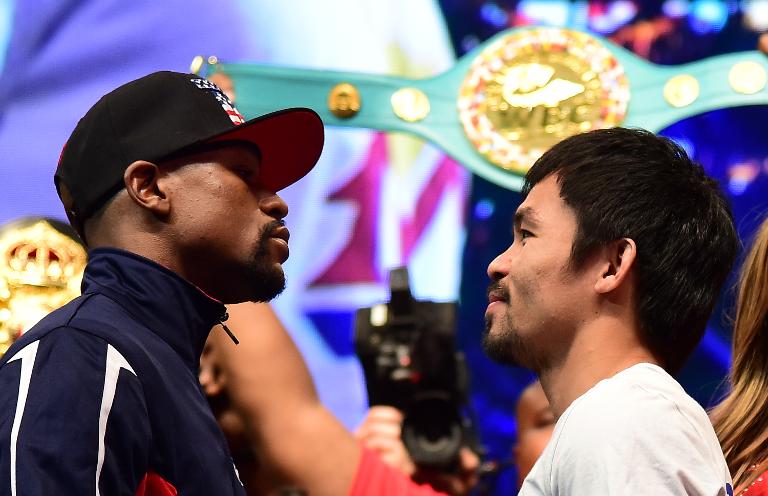 Years of debate and months of hype were just a few hours away from reaching a climax as Manny Pacquiao and Floyd Mayweather prepared for their boxing showdown hyped as the “Fight of the Century.”

Las Vegas casinos were teeming with punters as the prospect of Pacquiao and Mayweather finally trading blows sent a crackle of anticipation rippling across the sporting world.

The long-awaited bout, which has been more than five years in the making, will rewrite the record books as the most lucrative fight of all time.

Total revenue for the bout could reach an eye-watering $400 million, fueled by as many as three million purchases on pay-per-view television.

The breathtaking figures — a possible $200 million payday for the unbeaten American and an estimated $100 million bonanza for Philippine icon Pacquiao — have intensified the spotlight on a fight between two of the greatest pugilists of their generation.

As a taster for the main event at the MGM Grand Garden Arena, a raucous crowd of 11,500 turned out for Friday’s weigh-in, as Pacquiao and Mayweather went nose-to-nose.

The few tickets that did go on sale for the bout itself were reportedly snapped up in one minute, with A-listers and high-rollers making up the vast majority of a 16,800 sell-out crowd, making the fight more akin to a nightout at the Oscars than two men attempting to pound the other to the canvas.

With just hours to go, dozens of tickets were still available on the resale website StubHub, ranging in price from $2,690 to $37,442 apiece.

The MGM Grand was heaving with fans hours before the fight Saturday.

Swanky starred restaurants and fast-food outlets were already packed, and promised to be even more crowded by fight time.

Lines were long to the betting windows at the sports book, where copies of the odds and proposition bets were being handed out so bettors could mull wagers as they waited.

Souvenir T-shirts and caps were flying off the shelves, although many of the big-fight shirts being worn were knockoffs, bought on the streets outside at less than half the $35 price of the official version.

Even if Saturday’s bout doesn’t measure up to Mayweather’s claim of the “biggest fight in boxing history,” it is set to be an intriguing clash of styles between men of contrasting personalities.

Pacquiao, 36, a two-term congressman with a music and film career, credits the grace of God for lifting him from poverty in his youth and later guiding him away from a life of excess that his ring success made possible.

“Pacman,” who undoubtedly had the crowd on his side at the weigh-in, will go into the ring with all of the Philippines in his corner.

Streets will be empty on fight night — Sunday morning in the Philippines — as the nation of 100 million cheers its “National Fist.” Guns often fall silent in the war-torn south of the country when the beloved Pacquiao is in action.

The brash Mayweather touts his status as a money-making machine and comes from a troubled past that includes jail time for one of a string of domestic violence incidents.

Mayweather, 47-0 with 26 knockouts, is a 2-1 favorite to add Pacquiao’s World Boxing Organization world title to his own World Boxing Association and World Boxing Council belts.

Public opinion is with Pacquiao; boxing experts say Mayweather to triumph, most likely by 12-round decision.

Mayweather, 38, is a supremely skilled boxer and potentially devastating counter-puncher, famed for his ability to hit without being hit.

Pacquiao, who owns a record of 57-5-2 with 38 knockouts, says he is content in his underdog role.

A winner of world titles in an unprecedented eight weight divisions, Pacquiao noted that he’s beaten plenty of big foes, among them Oscar De La Hoya in 2008.

“No one thought I could beat Oscar, and I was the underdog then,” said Pacquiao.