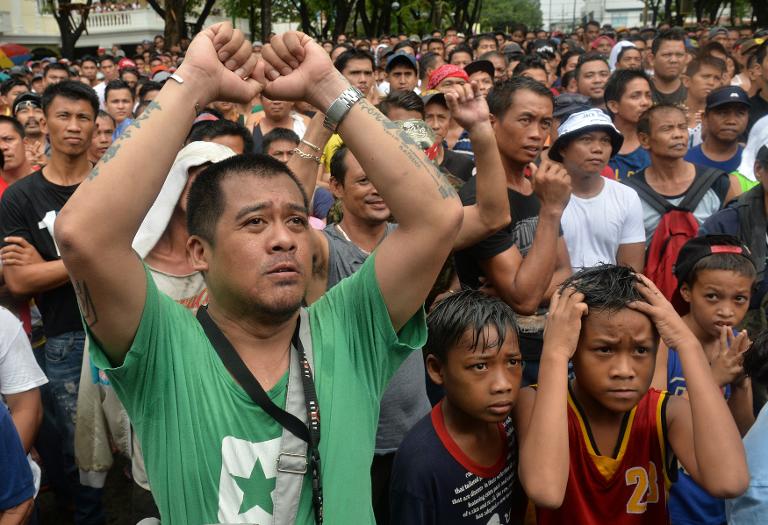 Boxing fans in the Philippines cried foul and groaned in bitter disappointment on Sunday as national hero Manny Pacquiao lost to American rival Floyd Mayweather in the “fight of the century”.

Filipinos filled gymnasiums, cinemas and bars as the Southeast Asian nation of 100 million people stopped for Pacquiao’s battle with Mayweather in Las Vegas, which he lost in a unanimous points decision.

A devastated Pacquiao said immediately afterwards that he thought he had won, and many at home agreed with him as they lashed out at the judges while heaping praise on their inspiration.

Rivera was among thousands of mostly poor people who had gathered in the main public square of Manila’s Marikina suburb to watch the battle on a giant screen mounted on the back of a flat-bed truck.

In the southern port city of Zamboanga, loud boos echoed inside an army gymnasium where thousands of soldiers and their relatives watched Pacquiao given just the sixth defeat of his career.

“The decision was unfair. From the start, the commentators were for Manny. Everyone is disappointed,” Lieutenant Colonel Noel Precioso said as others nearby expressed similar sentiments.

“I think the decision was not fair. Like Manny said, he thought he was ahead with points. Both fought carefully but Manny was more aggressive. He was hitting Floyd,” Catapang said.

Pacquiao, 36, is a unifying figure in a country beset by grinding poverty, natural calamities and corruption.

His rags-to-riches story, from high school dropout to millionaire world boxing champion in an unprecedented eight weight divisions, is a huge source of hope and pride in the Philippines.

His fights throughout his career have caused the nation to grind to a halt, with nearly everyone stopping to watch them. Famously, even crime has dropped to nearly nothing during Pacquiao fights.

President Benigno Aquino said before the Mayweather clash that Pacquiao, who has recorded 57 victories and two draws in his career, was an “inspiration for every Filipino”.

Presidential spokesman Edwin Lacierda said immediately after the loss that it had not diminished Pacquiao’s standing.

“Pacquiao is truly the People’s Champ. He fought for respect, not points. He won the hearts of the world,” Lacierda said in a statement.

“Manny’s life story lifts the spirit of every Filipino who struggle daily to rise from adversity. His humility and faith is an inspiration to all of us,” he said.

Pacquiao leveraged his boxing popularity to get elected in parliament in 2010 and he has said he may run for president in the future.

Pacquiao is also a coveted endorser of international and local brands, making him currently the highest taxpayer in the Philippines.

And with the fight against Mayweather widely believed to be the most lucrative in boxing history with revenues of $400 million, Pacquiao is set to return home with far deeper pockets despite having been vanquished.