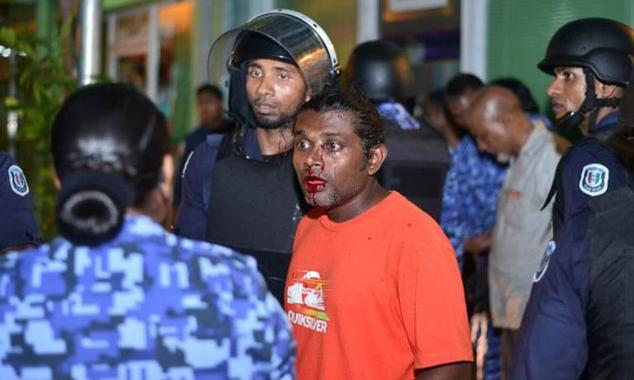 Male:Â Police in the Maldives said they had made nearly 200 arrests during clashes at a protest over the jailing of former president Mohamed Nasheed, after the UN’s top rights body denounced his trial as unfair.

Riot police fired tear gas and baton-charged the late night protest on the honeymoon islands, said witnesses to what was the biggest show of support for Nasheed since he was handed a 13-year jail term in March.

Nasheed’s Maldivian Democratic Party (MDP) said one of its top lieutenants were among those arrested on the capital island of Male, while the head of the largest Islamist party in the mainly Sunni Muslim nation was detained.

The streets of Male appeared to be calm Saturday morning as police put the number of arrests at 193.

While Nasheed’s supporters said the “brutal” crackdown could not be justified, authorities insisted they acted lawfully in breaking up the protest.

“The organisers of the protest addressed the protesters and called on all gathered to topple the government and confront the police,” a government statement said.

MDP spokeswoman Shauna Aminath said 195 people had been arrested since Friday evening when the protest began.

The party said President Abdulla Yameen’s security forces had responded to what it called a peaceful protest “with tear gas, baton charges (and) stun grenades”.

“All key opposition figures are now under arrest,” Aminath told AFP. “It was a brutal crackdown by the regime.”

She said the party’s chairman Ali Waheed had been arrested along with Sheik Imran, leader of the main Islamic Adhaalath Party, who was an organiser of Friday’s protest.

Yameen came to power in late 2013 after controversially beating Nasheed in a run-off election despite trailing in the first round.

He was toppled in February 2012 after a mutiny by police and troops that followed weeks of protests over his ordering of the arrest of a top judge who had been appointed by Gayoom.

The arrest formed the centre-piece of Nasheed’s prosecution. His conviction triggered widespread international condemnation and alarm in regional powerhouse India.

The MDP put the number of people taking part in Friday night’s protest at 25,000, a huge figure given the islands’ population is only around 330,000. There was no word on the turnout from police.

The protest came only hours after the United Nations criticised the jailing of Nasheed on March 13 on anti-terror charges as “arbitrary” and said the sentencing had followed a “vastly unfair trial”.

The UN Human Rights Office said their delegation, which visited Male late last month, found Nasheed had been subjected to a “rushed trial” under a system that was highly politicised.

It asked Yameen, the half-brother of Gayoom, to ensure the safety of Nasheed and allow freedom of expression.

Nasheed’s lawyer filed a petition on Thursday with the UN arguing his detention is illegal and a violation of international law.

The appeal to the UN Working Group on Arbitrary Detention in Geneva came as Nasheed’s wife Laila Ali visited Washington to lobby the White House, State Department and Congress.

“This is a very difficult time for me and my children, but today I also have hope,” Ali said, alongside her legal team that includes London-based rights lawyer Amal Clooney.

In a report last week, Amnesty International said protesters in the Maldives were being frequently beaten up while the media faced a growing number of death threats.

Despite the backlash, the government has insisted Nasheed received a fair trial and has told its critics to respect the verdict.

“A free and fair trial has happened. A verdict has come,” Foreign Minister Dunya Maumoon, who is Gayoom’s daughter and Yameen’s niece, said last month.