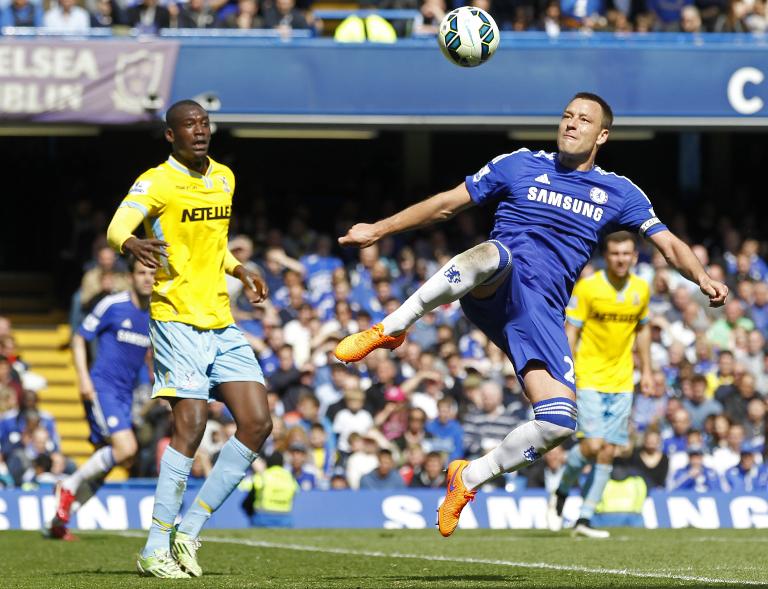 Eden Hazard scored the only goal of the game as Chelsea beat Crystal Palace 1-0 in front of their own fans at Stamford Bridge to give the Blues an unassailable lead at the top of the table with three games to spare.

On the stroke of half-time, Hazard’s poorly-struck penalty was saved by Palace goalkeeper Julian Speroni only for the Belgian star to head in the rebound.

“Every title is a consequence of hard work and a reason to be happy and proud,” said Blues manager Jose Mourinho, who has now won three league titles with Chelsea after previous successes in 2005 and 2006 during his first stint.

By the time second-placed City kicked off across London, away to Tottenham Hotspur, they knew they had been deposed as champions.

However, Manuel Pellegrini’s men still had something more than pride to play for as while the top four clubs at the end of the season qualify for the Champions League, only the top three go straight into the tournament, with the fourth-placed side having to enter a qualifying round.

Sergio Aguero cemented his position as the Premier League’s top-scorer this season by firing in the only goal of the game as City won 1-0 at White Hart Lane.

Aguero’s 22nd top-flight goal this term came just before the half-hour mark when, after good work by David Silva, he finished off a rapid counter-attack with a blistering shot into the top corner.

“Sergio can always get us a goal, we managed to get the ball up to him and then we’ve defended for our lives,” Hart told Sky Sports.

“Congrats to Chelsea on winning the title, it is well deserved. To lead from the front and stay there — we’ve done that before and it’s difficult — is impressive. But they know we will be back stronger next season.”

Frustrated Tottenham manager Mauricio Pochettino said: “I feel proud of our players. The performance was very good and we deserved much more.”

City’s win left them 13 points behind Chelsea, with only a maximum of nine on offer to Pellegrini’s side in their three remaining league games.

Meanwhile Arsenal will kick-off away to Hull on Monday 16 points adrift of Chelsea, with only 15 more available to Arsene Wenger’s men.