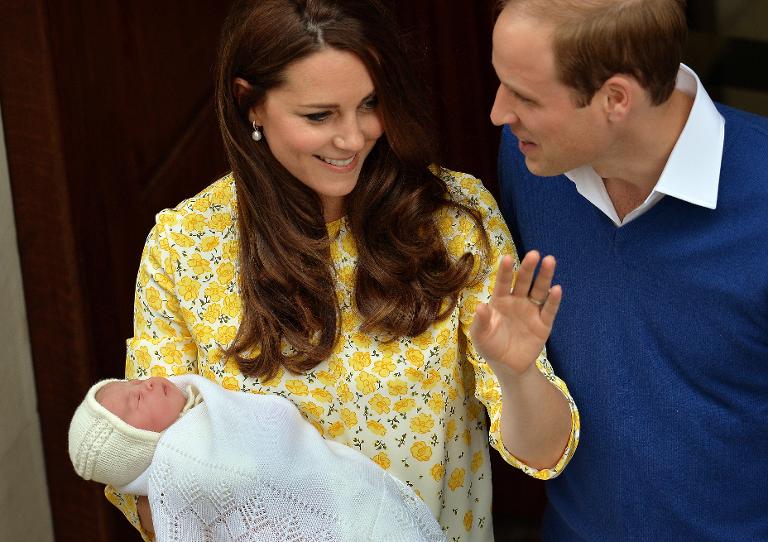 From fashion to specially-minted coins, here is an A to Z on Prince William and his wife Kate’s second child, a baby daughter born on Saturday.

A is for ANNOUNCEMENT. A proclamation was displayed on an easel at the gates of Buckingham Palace, while news of the birth was tweeted by Kensington Palace and emailed to the press.

B is for BROTHER. The new royal baby is 21 months younger than older brother Prince George, who is directly in line to become king one day.

C is for CHRISTENING. The baby will be baptised wearing a replica of a lace and satin gown that has been used since 1841. Tradition dictates the Archbishop of Canterbury Justin Welby, England’s highest cleric, will conduct the christening.

D is for DUTY. Once an adult, a lifetime of royal duty on behalf of the sovereign awaits.

E is for EDUCATION. The new royal is set to enjoy exclusive schooling. Both William and his brother Prince Harry went to the elite boarding school Eton for boys.

F is for FASHION. The new princess will be a trendsetter before she can walk and talk — anything George has been seen wearing has flown off the shelves.

G is for GRANDPARENTS. William’s father Prince Charles, the heir to the throne, was said to be “absolutely delighted”.

H is for HOME. The princess will grow up at the Cambridges’ apartment in London’s Kensington Palace and Anmer Hall, a country house on Queen Elizabeth II’s private Sandringham estate in eastern England.

I is for INTEREST. The birth has sparked huge interest around the world, with international media camped outside the hospital doors waiting for the first glimpse of the baby girl.

J is for JORDAN. The baby will be baptised with water from the River Jordan.

K is for KATE. The 33-year-old duchess suffered acute morning sickness again during her second pregnancy, causing her to miss royal engagements.

L is for LINE OF SUCCESSION. The princess was born fourth in line to inherit the throne, behind George and directly in front of uncle Harry.

N is for NAMES. Royal babies often get several Christian names, with George getting three. Bookmakers’ favourites for a girl are Alice, Elizabeth, Charlotte, Alexandra and Victoria.

O is for OBSTETRICIANS. The medical team was led by Guy Thorpe-Beeston, the surgeon-gynaecologist to the royal household, who was assisted by his predecessor Alan Farthing.

P for PRIMOGENITURE. Laws which took effect in March ending male primogeniture mean girls born after October 28, 2011 can no longer be overtaken by younger brothers in the line of succession.

Q is for QUEEN ELIZABETH II. The baby is the monarch’s fifth great-grandchild and her 17th descendant.

R is for ROYAL MINT. They will produce a Â£5 coin in celebration and gift a special “lucky” silver penny to 2,015 babies born on the same day.

S is for ST MARY’S HOSPITAL. The baby was born in the private Lindo Wing of the hospital in Paddington, central London. A two-room suite costs Â£6,750 a night, though consultants’ fees can double that.

T is for TITLE. The baby will be known as Her Royal Highness Princess (name) of Cambridge.

U is for UNCLE HARRY. William’s fun-loving brother is coming out of the army and so may have more time to babysit. The baby will also have Auntie Pippa and Uncle James on her mother’s side.

W is for WILLIAM. The 32-year-old duke is training to become an air ambulance pilot. He will take two weeks’ paternity leave.

X is for the baby girl’s name, which is not yet known.

Y is for YELLOW. A relaxed looking Kate appeared in a lemon yellow and white floral patterned dress as she and William showed the newborn to the public for the first time outside St Mary’s Hospital.

Z is for ZZZ… William and Kate can expect months of sleepless nights, but their nanny will be on hand to ease the burden.