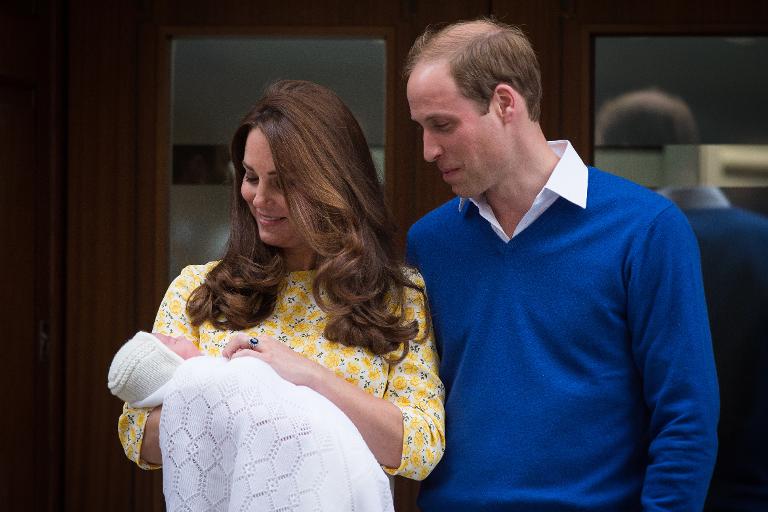 Prince William’s wife Kate gave birth to a baby girl on Saturday, sparking celebrations in Britain for the royal family’s new fourth in line to the throne.

The beaming couple left the hospital carrying the newborn princess in front of hundreds of screaming well-wishers and amid a flurry of flashes from the assembled crowd of photographers.

A relaxed-looking Kate cradled the sleeping baby, wrapped in a woollen shawl, in her arms in front of the private Lindo Wing of St Mary’s Hospital in central London.

William then drove his wife and daughter to nearby Kensington Palace, the couple’s official residence, after carrying the baby to the black Range Rover in a car seat.

He had said earlier he was “very happy” when he came out of Kensington Palace to pick up the couple’s first child, 20-month-old Prince George, and bring him back to the clinic to meet his as yet unnamed little sister.

Bookmakers have Alice as their most likely name, followed by Charlotte and Elizabeth.

The birth was announced to the world in a tweet from Kensington Palace and by a traditional town crier in a colourful costume and a feathered tricorne hat, ringing a bell on the steps of the clinic.

As per tradition, a proclamation signed by the royal doctors was also placed on a gilded easel in front of Buckingham Palace, where hundreds of onlookers crowded by the gates to witness the historic moment.

“Her Royal Highness The Duchess of Cambridge was safely delivered of a daughter at 8:34am,” Kensington Palace said in a statement.

William was present for the birth and the princess weighed eight pounds and three ounces (3.7 kilogrammes).

George’s brief visit to the clinic was the first time since his own birth there in July 2013 that he had been seen at a public event in Britain as his parents have shielded him from the media and threatened to sue paparazzi who take his picture.

Great-grandmother Queen Elizabeth II and other senior royals were told the news before the formal announcement.

Grandfather Prince Charles, the heir to the throne, was said to be “absolutely delighted”.

The queen wore a pink dress and shawl at a military parade she attended in northern England later on Saturday in apparent homage to the new arrival.

Prime Minister David Cameron led congratulations from around the country that included the message “It’s a Girl” scrolled on a display on top of London’s BT Tower.

Royal Navy sailors on board HMS Lancaster sent a unique message of congratulations by lining up on the flight deck to spell out the word “sister”.

Media teams from around the world rushed to the private maternity wing of St Mary’s in the early morning, joining a group of royal superfans who have camped outside for nearly two weeks.

The baby was born less than three hours after Kate was admitted to hospital at around 6:00 am, compared to the more than 10 hours of labour with George.

“It’s a girl! It’s a girl!” the diehard supporters sang out after the birth was announced, also intoning the tune of “Happy Birthday” for the royal baby.

The new princess sits fourth in line to the throne after Queen Elizabeth’s eldest son Charles, his eldest son William and his son George.

She is the first major royal who cannot be overtaken in the line of succession by any future younger brothers following changes to the monarchy’s rules to remove gender bias.

Many wellwishers spoke of their memories of William’s late mother, princess Diana, who gave birth to William and his brother Prince Harry in the same clinic.

She died in a car crash in Paris in 1997 and her memory is still cherished by many around the world.

“What an amazing day!” Sadie Moran, a 45-year-old wrapped in a British flag, told AFP.

“It’s like a memory of princess Diana,” she said.

At Buckingham Palace, a queue formed to file past the easel announcing the royal birth.

Kensington Palace later said William and Kate wanted to thank all the hospital staff for the care and treatment they received.

“They would also like to thank everyone for their warm wishes,” the statement added.

The royal couple are planning to spend the next few days at Kensington Palace.

They will then travel to Anmer Hall, a secluded 10-bedroom country mansion on Queen Elizabeth’s privately-owned Sandringham estate in Norfolk, eastern England, where they have set up home.

Gun salutes will be fired across London on Monday to mark the birth.