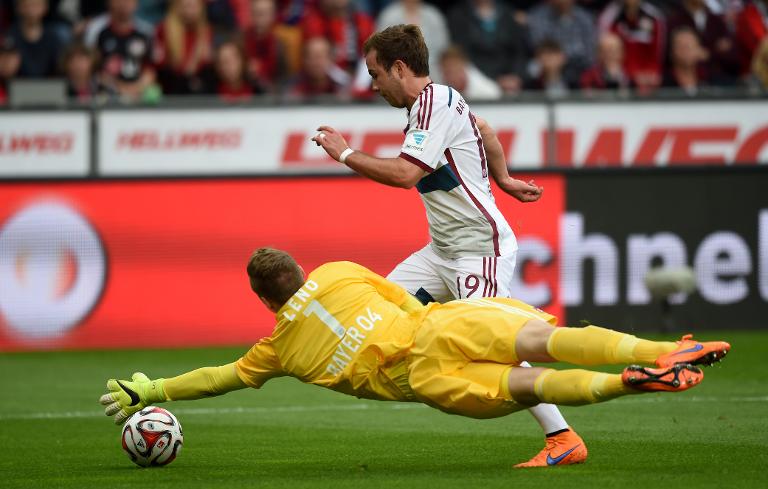 Bayern Munich coach Pep Guardiola has no idea who will play against Barcelona in the Champions League semi-final this week as injuries take a mounting toll.

While a rampant Barcelona warmed up for Wednesday’s tie with an 8-0 hammering of Cordoba in La Liga, Guardiola watched an ailing Bayern lose 2-0 to Bayer Leverkusen and then acknowledged his Champions League doubts.

“We don’t know yet about the line-up against Barca,” he said.

“As for Robert Lewandowski and Franck Ribery, we just don’t know if they are ready — and we don’t know when we will know.

“Our line-up is not yet settled,” he said.

Bayern already know they will be without Arjen Robben who tore a calf muscle in his return from injury last week and will now miss the rest of the season.

French ace Ribery has been sidelined since injuring an ankle on March 11.

Neuer needs one more clean sheet to beat Oliver Kahn’s record of 19 Bayern games in a season without conceding a goal.

Leverkusen’s Turkish international Hakan Calhanoglu fired a direct free kick from 25 metres through the Bayern wall and past Neuer.

In the second half, Karim Bellarabi tore through the Bayern defence in a brilliant length of the field run before passing to Julian Brandt who claimed an easy goal on his 19th birthday.

Guardiola remained upbeat about the performance.

“We had plenty of chances and some clear one-on-one situations, but could not convert. I am actually quite satisfied with my team,” he said, stressing that they had won the title one week earlier.

“We played well. Mario Goetze had two clear chances that he didn’t convert. He was unlucky. That happens – he is a good player and we are a good team.”

Guardiola left Lewandowski, Thomas Mueller and Jerome Boateng out of the squad and Xabi Alonso and Thiago Alcantara started on the substitutes’ bench in a bid to have them fresh for Wednesday.

And the result was a new blow after their German Cup defeat however.

The 2-0 win took Leverkusen, now unbeaten in 10 league games, into third place one point ahead of Borussia Moenchengladbach and into one of the three automatic qualifying places for next season’s Champions League. Moenchengladbach play at Hertha Berlin on Sunday.

Dutch international Bas Dost got his 14th league goal of the season to put Wolfsburg ahead with a volley that nearly knocked out Hanover goalkeeper Ron-Robert Zieler as it headed for the net.

Hanover fought back though. French striker Jimmy Briand scored two minutes into the second half.

Japanese international defender Hiroki Sakai sent across a corner that was badly cleared and Salif Sane smashed the ball into the net with a stunning overhead kick.

Wolfsburg, who have secured a Champions League place for 2015-16, are now 14 points behind Bayern.

And Dieter Hecking’s team could see their lead over Moenchengladbach cut to two points if their rivals win on Sunday.

Wolfsburg’s German Cup final opponents Borussia Dortmund had to fight back for a 1-1 at Hoffenheim.