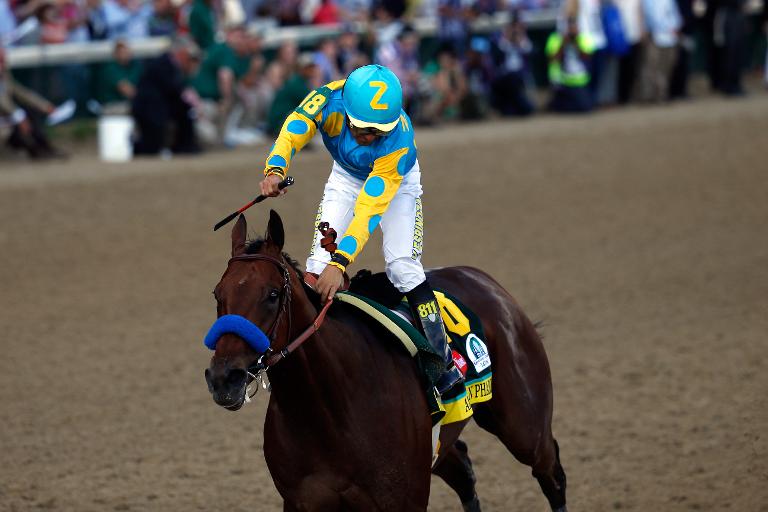 The two-year-old trained by Bob Baffert hit the front just past the final turn to finish ahead of Firing Line in second and Dortmund in third, roared on by a record crowd of 170,513 people at Churchill Downs.

The 5-2 favorite made light of a tricky wide starting position to surge into the leading pack from the outset in the 141st edition of the “Run for the Roses,” the opening leg of racing’s Triple Crown.

Stablemate Dortmund and Firing Line set the early pace down the back straight but coming into the final turn, Espinoza swept wide and confidently hit the front.

Firing Line, under the guidance of the 52-year-old Gary Stevens, rallied furiously down the stretch, but American Pharoah held on to give Espinoza a second consecutive Derby win following his triumph on California Chrome last year.

“I feel like the luckiest Mexican on Earth,” said a delighted Espinoza, who has now three Kentucky Derby victories to his name following a win on War Emblem in 2002.

“I was growing up and all I wanted to be was successful and I chose to be a jockey,” said Espinoza, who as a teenager worked as a bus driver in Mexico City to pay for jockey school before moving to the United States.

The 42-year-old veteran also paid tribute to American Pharoah after a deserved victory.

“He’s been a special horse since the day I rode him. He’s an unbelievable horse,” he added, admitting he had been spooked by the persistence of Firing Line in the home straight before holding on to win.

“Turning for home I thought I had it, but the other horse was right there. I couldn’t blow him away, but I got it done.

“He’s just an amazing horse. Today I just let him run and I’m just a lucky Mexican to win three Kentucky Derbies and two in a row,” Espinoza said.

“I can’t even tell you how it feels.”

Trainer Baffert meanwhile dedicated the win — his fourth Kentucky Derby triumph — to Egyptian-born owner Ahmed Zayat, who has seen three of his horses in previous editions of the race finish second.

“This is for the Zayat family,” Baffert said.

“It’s such a privilege to even have a horse to come here with. And then to win it — it never gets old,” he added.

“I feel so lucky to be in this position. This American Pharoah though, he’s just something… he makes a trainer really look good. So thank God for great horses.

“It’s a fantasy moment for me. It’s unbelievable that I’m standing here for a fourth time — I can’t believe how blessed and lucky my life has been.

A jubilant Zayat was overcome with joy as he finally accepted the trophy honors after three previous near-misses.

“We’re extremely thrilled and honored. This is one special horse. This is a dream come true. We are just beyond blessed.”

American Pharoah will now set his sights on the second leg of the Triple Crown, the Preakness at Pimlico on May 16, before the Belmont Stakes on June 6.

Only 11 horses in history have landed all three races in the same season, with the last to win it being Affirmed in 1978.