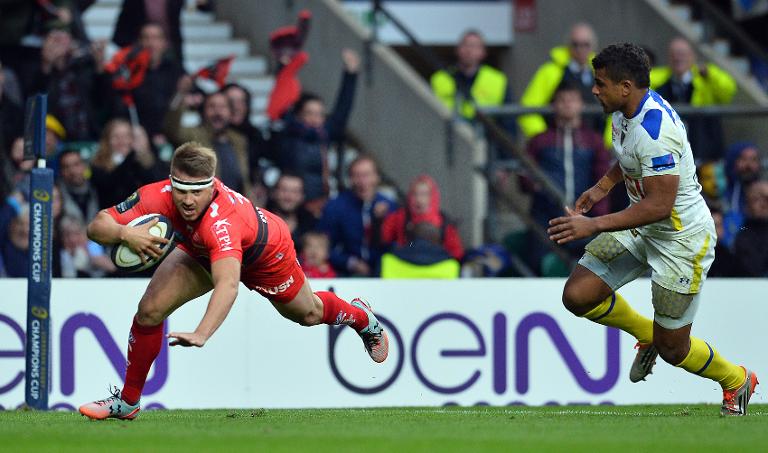 New Zealand and Australia are normally fierce rugby rivals but Ali Williams put familiar sentiments to one side as he celebrated Drew Mitchell’s match-winning try for Toulon against Clermont in the European Champions Cup final at Twickenham.

The Wallaby wing managed to evade six defenders as he went over some 10 minutes from time to seal a 24-18 win for Toulon in this clash between two of the powerhouse teams of French rugby union.

After the match, Williams said he had “never loved an Australian as much as I loved Drew Mitchell when he scored that try.”

Mitchell, however, modestly played down his effort by telling Sky Sports: “It went my way, I’ll absolutely take that one but it was more sustained pressure by the boys up front and I finished it off.

“It’s about taking opportunities and luckily we took one more than they (Clermont) did.”

Saturday’s success added to Williams’s list of Twickenham memories as it was at the London ground where he made his Test debut for New Zealand some 13 years ago.

The 34-year-old, who is set to retire at the end of the season, was in no doubt about the scale of Toulon’s achievement.

“That was incredible,” Williams told BT Sport. “We haven’t been together for that long, two or three years, and you come together and you have got so much respect for each other and you don’t want to let each other down.

“We probably haven’t played the most attractive rugby all season,” said Williams in an acknowledgement that the Toulon side coached by former France boss Bernard Laporte have often been criticised for failing to make the most of a star-studded team.

“But deep inside you, you just know how to win and I think that came through today and it came through on several other occasions,” said Williams.

He added: “I love playing the game. It means so much to me and it’s been the best part of my life ever.

“Finishing up now, and I’ve had a lot of fun so thanks everyone,” said Williams, whose father had made the long journey from New Zealand to be in a Twickenham crowd of more than 56,000.

The joy of victory seemed to have got to Toulon backer Mourad Boudjellal, the comic-book publisher who has poured millions of his own fortune into the club.

Having once described Clermont as “The Trolls of the Massif Central,” Boudjellal walked round the touchline after Saturday’s match to shake hands with fans of the losing finalists.

“The most important thing was defence and to keep working for each other and (give away) no penalties,” said Armitage, the reigning European player of the year.

By contrast, Clermont’s ill-discipline was punished by ace Wales goal-kicker Leigh Halfpenny, who landed four penalties and a conversion for a 14-point haul.

The full-back, who joined Toulon from Cardiff Blues before the start of the season, said: “This is where you want to be, involved in games like this, and what a performance from the boys!

“The character they showed at the end to keep Clermont out at the end was outstanding and what a feeling.”

For Clermont this was the second time in three years they had lost to Toulon in European rugby’s showpiece match and, having been beaten in 10 French Top 14 finals, this loss added to their unwanted reputation as a perennial ‘nearly’ side.

“The effort was there, it was just the execution,” said Clermont and Wales centre Jonathan Davies.

“There is huge disappointment,” he added. “We have to get silverware for this town.”