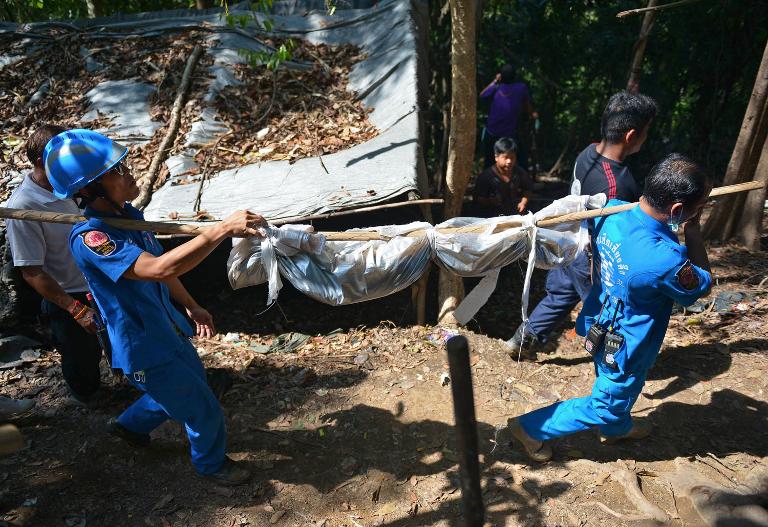 The remains of 26 migrants thought to be from Myanmar or Bangladesh have been exhumed from a mass grave after Thai police ended their search Saturday, as details emerged of the maltreatment endured at the remote people smugglers’ camp.

Thai forensic teams dug out badly decayed skeletons from shallow graves covered by bamboo and a few of feet of dirt throughout Saturday, according to an AFP reporter at the abandoned jungle camp in Sadao district, in Songkhla province.

“In total we have 26 bodies. As far as I know one is a woman. We still cannot tell the cause of their deaths,” head of the forensic team Police General Jarumporn Suramanee told AFP.

“There are no more bodies. Every hole has been searched.”

Friday’s grim discovery of the site, which is a few hundred metres (yards) from the border with Malaysia, again laid bare Thailand’s central role in a regional human trafficking trade.

Two survivors — men aged 25 and 35 — told doctors they had spent months at the camp despite falling sick and having little to eat.

“Both are malnourished, have scabies and lice,” doctor Kwanwilai Chotpitchayanku told AFP at Padang Besar hospital.

“The older man could not walk, he had to be carried off the mountain. He hadn’t eaten anything for two days before he was found. He told the translator he had a fever in the jungle for two months.”

Doctors said the men had not been fully identified but were from either Bangladesh or Myanmar.

Both were rigged to IV drips and appeared frail as they lay in their ward beds.

While the cause of the migrants’ deaths is not yet clear, Thailand’s police chief has described the site as a “virtual prison camp” which was seemingly abandoned just days before its discovery, with the sick men left for dead.

A rescue worker said one unburied corpse belonged to the recently deceased, seeming to indicate the camp had been occupied recently.

The border zone with Malaysia is criss-crossed by trafficking trails and is notorious for its network of secret camps where smuggled migrants are held, usually against their will, until relatives pay up hefty ransoms.

– Trafficking ‘out of control’ –

Rights groups say the camp, which is a steep, slippery 40-minute hike from the nearest road, is likely to be just one of dozens in the area as the rewards of trafficking continue to outweigh the risks of being caught.

Tens of thousands of migrants from Myanmar, mainly from the Rohingya Muslim minority but also increasingly from Bangladesh, make the dangerous sea crossing to southern Thailand, a well-worn trafficking route often on the way south to Malaysia and beyond.

The exodus of Rohingya — described by the UN as one of the world’s most persecuted minorities — has followed deadly communal unrest in western Myanmar’s Rakhine state since 2012.

Rohingya refugees living in Bangladesh have also been kidnapped and trafficked to Thailand, after being duped with fake job offers or even drugged.

Thailand says it is cracking down on the trafficking networks on its soil after revelations that government officers, police and navy officials have been involved in the lucrative trade in humans fleeing poverty and persecution.

“We will go after the people responsible (for the grave site) no matter how powerful they may be,” General Aek Angsananont, national police deputy commissioner, told reporters in Padang Besar.

“We care about our image, when people say we’re not doing anything about it, it’s not true. It’s a national agenda.”

In June the United States dumped Thailand to the bottom, or “Tier 3”, of its list of countries accused of failing to tackle modern-day slavery.

Last week UN Secretary General Ban Ki-moon described the condition of such camps as “untenable”, adding that their existence should “remain a matter of profound concern for the international community”.

Activists say traffickers are changing their tactics as the crackdown bites and are also holding thousands of migrants at sea for endless weeks awaiting payment before releasing them.

Thailand’s human trafficking problem is “out of control”, according to Brad Adams, Asia director of Human Rights Watch.