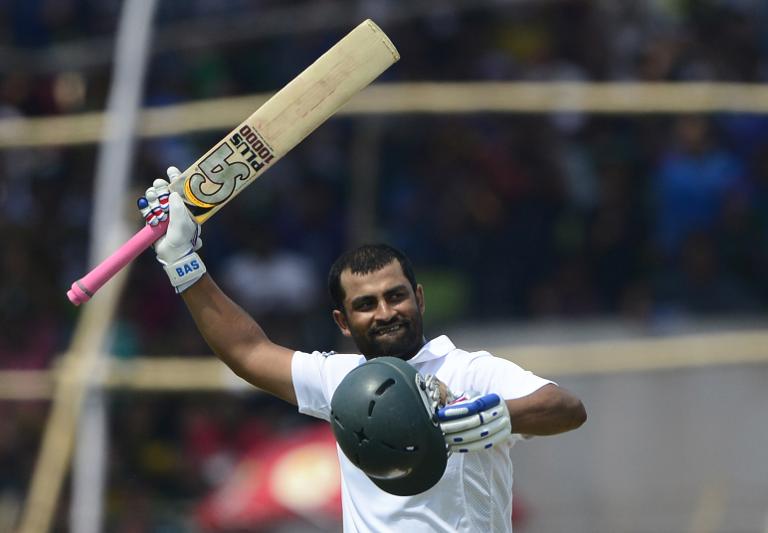 Tamim Iqbal smashed Bangladesh’s highest Test score of 206 as the first Test against Pakistan petered out into a draw after another run feast in Khulna on Saturday.

The hosts made light of the 296-run deficit in the first innings as they posted a mammoth 555 for six in their second knock before the match was called off after tea on the fifth and final day.

The draw was a morale-booster for Bangladesh, who had lost all their eight previous Tests against Pakistan, ahead of the second and final match starting in Dhaka next Wednesday.

A stalemate was always on the cards on the heart-breaking pitch for bowlers at the Sheikh Abu Naser stadium which produced 1,515 runs for the loss of just 26 wickets over the five days.

Bangladesh had made 332 in the first innings after electing to take first strike and Pakistan replied with 628 on the back of a double-century from Mohammad Hafeez.

Rival captains Mushfiqur Rahim of Bangladesh and Misbah-ul Haq of Pakistan both blamed the wicket for the high-scoring draw.

“It was difficult to take 20 wickets on this pitch,” said Rahim. “But I hope we will be able to do that in the next match. We will prepare well for it.”

Misbah said the pitch provided no assistance to either the fast bowlers or the spinners.

“It was very slow which made it difficult for the bowlers,” he said. “The batsmen really enjoyed themselves in this Test.

“I thought with a lead of around 300, we could have put Bangladesh under pressure, but all credit to their batsmen, especially Tamim and Imrul, for saving the game.

“But we must do better in the field, both with our bowling and catching, if we are to win the second Test.”

The home team’s batting assault left Pakistan still searching for their first win on the tour after being whitewashed 3-0 in the one-dayers and also losing the Twenty20 international.

The huge lead was wiped off by a record 312-run opening stand between left-handers Tamim and Imrul Kayes, which was Bangladesh’s highest-ever partnership for any wicket.

“I am very pleased because whatever I had planned came off nicely,” said the 26-year-old Tamim. “I needed this innings as much as my team did. It was not going to be easy after we were 296 runs behind.

But we all played our role. It was a great team effort. We have done well in the one-dayers and now we are proving ourselves in the Tests also.”

Kayes was dismissed for 150 in the morning session, holing out in the deep against left-arm spinner Zulfiqar Babar after striking 16 boundaries and three sixes.

But Tamim continued unhindered as he moved into the 190s by striking leg-spinner Yasir Shah for two consecutive sixes before reaching 201 with a straight-driven six off seamer Junaid Khan.

That shot helped him surpass Rahim’s 200 against Sri Lanka in Galle in 2013, which was the previous best Test score by a Bangladeshi batsman.

Tamim hit 17 boundaries and seven sixes before he was stumped off Hafeez just before tea attempting another big hit.

But Pakistan’s misery in the field continued after Tamim’s departure as star all-rounder Shakib Al Hasan stepped in to hit an unbeaten 76.

Spinners Shah (0-123) and Babar (1-125) were the most expensive of the seven bowlers used by Pakistan to contain the flow of runs.