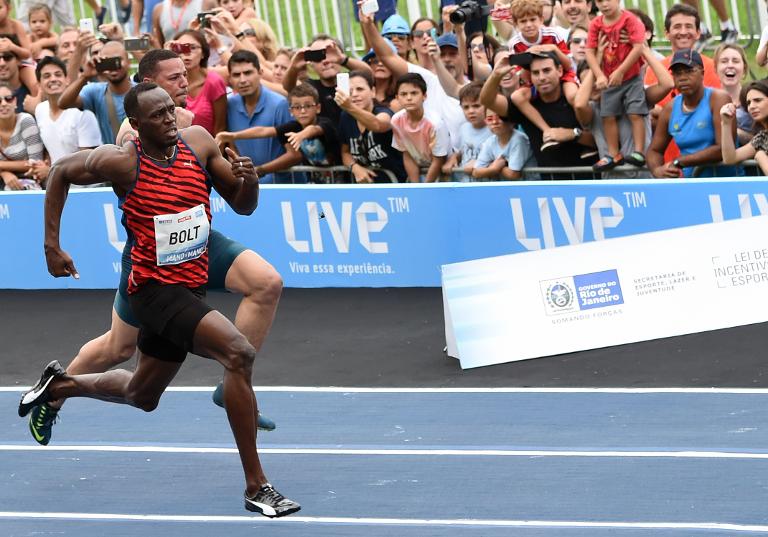 Jamaican sprint sensation Usain Bolt is back from an injury-blighted season and fully ready to soar to the heights that saw him set world records in both the 100 and 200m.

The six-time Olympic gold track medallist skipped a large part of last season with a nagging foot injury, but said he was gearing up nicely towards defending his sprint titles at the World Athletics Championships in Beijing in August.

“I have no pain,” said Bolt ahead of this weekend’s second World Relays in the Bahamas, adding that he saw his doctor every three months to “keep everything in line”.

“The main thing is to avoid injuries this season and go to the world championships.

“I’ll be happy to go back to Beijing, that’s where it all started,” he said in reference to the first of his Olympic treble gold haul at the 2008 Summer Games, mirrored four years later in London.

Bolt, who admitted that his social life had taken a back seat — “I try to limit myself as much as possible” — said his focus was getting in proper, competitive track time after his enforced absence.

“I’m in great shape, I can’t complain,” said the 29-year-old, who has anchored Jamaica to two Olympic titles and three world golds in the 4x100m relay.

He added: “Training and competing are two different things. The fact I wasn’t competing wasn’t good for me.

“So this season I’ve started off not at the pace I wanted, but I knew it was going to be like this because I wasn’t competing last season. But I am competing early and getting some races in, which is very good leading up to the world championships.”

Turning to the World Relays, which he missed last year when the Jamaican men won both the 4×100 and 4x200m relays — the latter in a world record time, Bolt said he was “happy to be back competing at full tilt”.

“I’m looking forward to the relays because I enjoy running relays,” he said. “It’s one of my favourite things to do because track and field is an individual sport so any chance I get to run with my teammates is always fun.

“It’s very relaxed. It’s going to be great, I know my teammates will put on a good show.

“The team lost to the US in the Penn Relays, so it’s like a showdown,” he said, playing down any friction over racing against in-form American rival Justin Gatlin, the 2004 Olympic champion who went on to serve a four-year ban for doping.

“I’ve talked about (US sprinter) Tyson Gay — I think it was unfair to the sport and it sent the wrong message,” he said of Gay’s two-year doping ban which was reduced by a year for his “cooperation”.

“When it comes to Justin Gatlin, he’s served his ban so for me it’s not an issue.

“Justin Gatlin is a great competitor. He’s one of those guys that talks a lot so he makes the sport interesting and I look forward to running with him this season. It’s going to be interesting because he’s been saying a lot!”

“I can definitely get to that level, it’s not a question,” the Jamaican insisted.

“The more I run the better I feel. The more races I get I know I get better, so I’m happy to be here at the relays because there’s going to be a lot of races and running hard.

“I never worry about one-off events because they’re stepping stones to the big goals.”