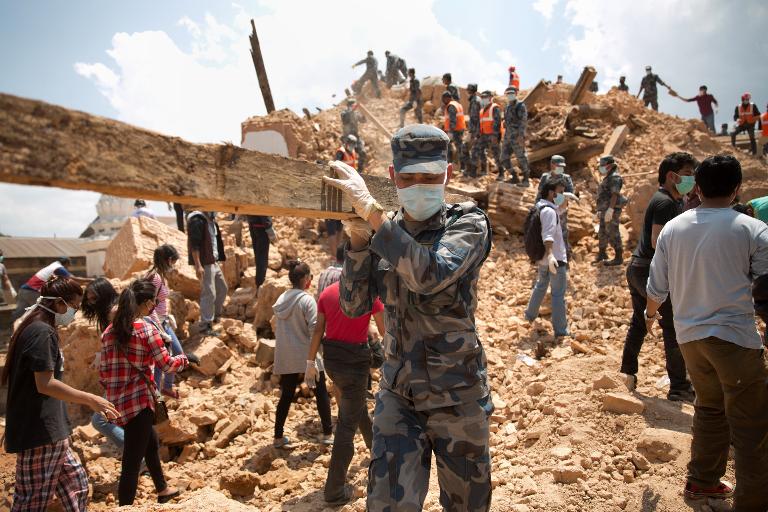 One week on from an earthquake that killed more than 6,700 people, Nepal ruled out finding more survivors buried in the ruins of Kathmandu Saturday despite relatives refusing to give up hope.

Two days after any signs of life had been detected among the mountains of rubble that litter the capital, the focus was shifting to reaching survivors in far-flung areas who have yet to receive relief supplies.

The UN children’s fund UNICEF warned of a race against time to avert an outbreak of disease among the 1.7 million youngsters estimated to be living in the worst-hit areas, with monsoon rains just a few weeks away.

The 7.8-magnitude quake wreaked a trail of death and destruction when it erupted around midday last Saturday, reducing much of Kathmandu to rubble and even triggering a deadly avalanche on Mount Everest.

“It has already been one week since the disaster,” home ministry spokesman Laxmi Prasad Dhakal told AFP.

“We are trying our best in rescue and relief work but now I don’t think that there is any possibility of survivors under the rubble.”

While multiple teams of rescuers from more than 20 countries have been using sniffer dogs and heat-seeking equipment to find survivors in the rubble, no one has been pulled out alive since Thursday evening.

Nevertheless, relatives of those missing have refused to abandon hope.

“I believe he must still be trapped and will be rescued alive,” said Suntali Tamang, whose husband Langte, 41, was believed to be in the same neighbourhood of Gongabu where the last survivors were found.

“I reached here three days ago after he went missing,” she told AFP after travelling to Kathmandu from the family’s home in the northeastern Dolakha district.

“He was the family’s breadwinner and I am praying for him to be brought back safely.”

The exact scale of the disaster was still to emerge, with the mountainous terrain in the vast Himalayan nation complicating the relief effort.

With relief workers still to reach many areas, it is likely to be some time before authorities come up with a comprehensive list of people missing but police said the task of compiling names had begun.

“We have only just begun to draw up the list, the number will obviously go up,” added the spokesman.

The numbers of foreigners who have died was also unclear with around 1,000 EU citizens still unaccounted for in Nepal, according to diplomats.

Tens of thousands of survivors have been living out in the open in Kathmandu in the week since the quake, having either lost their homes or fearful that aftershocks could bring teetering buildings to the ground.

“We are not living in this tent out of choice. We are here because we have nowhere to go,” said Dhiraj Thakur who has been camped out for the last week in Tundikhel Maidan, an open area in the centre of the city.

“I have seven family members with me which includes my wife, my sister, nephew and my parents. The rented room where we were living in Kathmandu is now in ruins.

“Most of our stuff is lost and even the person for whom I used to work as a driver is dead, so I don’t know where I will get the money for renting another room,” said the 24-year-old.

Shambhu Thapa, who worked as a cook in a hotel before it was wrecked in the quake, had decided to move back to his home village with his wife and three children now that he had no means of supporting them in Kathmandu.

“Even our village home is damaged, but at least it is our own land,” he said after another night out in the open.

Rameshwor Dangal, of Nepal’s National Disaster Management Division, said many were waiting to receive aid supplies or else be airlifted to safety.

“In many areas people are not getting relief and it is natural that they are unhappy about it,” he told AFP.

UN aid chief Valerie Amos on Saturday said she was extremely concerned that Nepal’s customs authorities were slowing the delivery of aid.

Amos said she had reminded Prime Minister Sushil Koirala that Nepal had signed an agreement with the United Nations in 2007 that provides for simpler and faster customs clearance for relief aid in the event of a disaster.

“He has undertaken to ensure that happens, so I hope that from now we will see an improvement in those administrative issues,” she told AFP.

In Sri Lanka, visiting US Secretary of State John Kerry said the United States had provided $22.5 million in aid relief to Nepal.