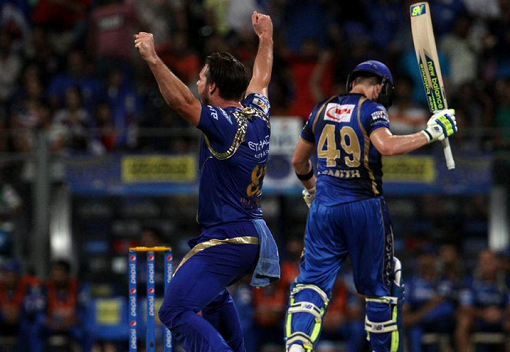 Mumbai:Â Mitchell McClenaghan grabbed two crucial wickets in as many balls as Mumbai Indians pulled off an exciting eight-run victory over Rajasthan Royals in their Indian Premier League cricket match, in Mumbai on Friday.Â

Chasing a stiff target of 188 set by Mumbai Indians, wicketkeeper Sanju Samson cracked a brilliant 76 in 46 balls to bring the Royals close to the target before New Zealander Mitchell McClenaghan dismissed him as well as Karun Nair at off successive balls to bring the home side back in the game when it seemed like it was drifting away from them.Â

Lasith Malinga grabbed the wicket of Deepak Hooda in the next over to leave Royals the task of scoring 20 runs in the last over and they finally fell short by eight runs by scoring 179 for 7.Â

McClenaghan snapped up 3 for 31 while Malinga, Vinay Kumar – who bowled the last over – and Jagadeesha Suchith got one wicket each while Tim Southee was run out.Â

Royals looked all set for their eighth win in ten games when Samson played a whirlwind knock laced with 3 sixes and six fours, but his dismissal through a catch at long off stymied the Royals’ run-chase.Â

It was MI’s third win in eight games and kept their play-off hopes alive. Earlier, put in to bat MI’s Rayudu struck a breezy half century to help Mumbai Indians overcome a sluggish middle phase after a good start to end up with a combative total.Â

Rayudu, promoted to fifth ahead of Kieron Pollard, justified the faith in striking a quick-fire unbeaten 53 in 37 balls, laced with 3 sixes and four fours to help lift MI recover from 120 for four after 15 overs to a more competitive total.Â

Rayudu put on 61 runs in only 30 balls with West Indian Pollard who made 24 in 14 balls before departing with two balls left to help MI finish the innings with a flourish.Â

Earlier a decent start of 43 was provided by openers Lendl Simmons (38 in 31 balls) and left-handed Parthiv Patel (23 in 14 balls) who were again guilty of not getting to a big score after getting their eyes in after MI were put in to bat by rival skipper Watson.