Home Politics Modi is like Krishna while Rahul is Mad 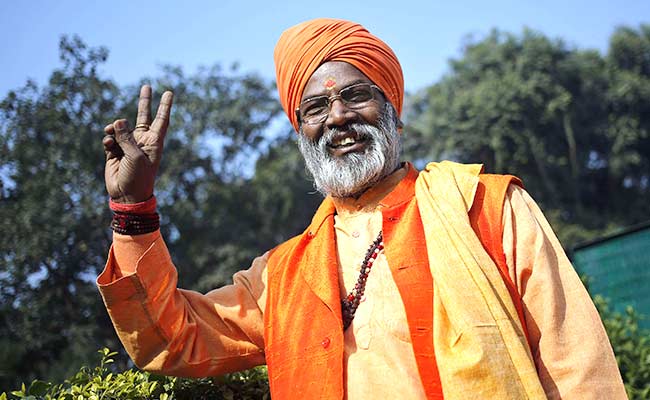 New Delhi: Staying true to his reputation of being a loose cannon and a cause of concern for the BJP, MP Sakshi Maharaj on Friday kicked up another row when he called Rahul Gandhi “mad” while trying to ridicule the Congress Vice President’s attempts to reach out to distressed farmers in the last few days.

This was not all. He also went to the extent of comparing Prime Minister Narendra Modi with Lord Krishna, saying like Krishna saved Draupadi, he rescued Nepal.

Taking a dig at heir apparent of Congress, the BJP MP from Unnao said Rahul Gandhi does not know the difference between wheat and maize.

“I say that Rahul Gandhi has gone mad. He does not know the ABCD of politics. He is talking of farmers but does not know the difference between wheat and maize,” Sakshi Maharaj said addressing a meeting at Amroli Ratanpur village in Uttar Pradesh.

While referring to the rescue and rehabilitation efforts launched by the NDA government in quake-hit Nepal, Sakshi Maharaj said,” after the devastation in Nepal, Modi reacted without hesitation. Similarly, Krishna had helped Draupadi when she needed it without hesitation. Modi has done the work of saving Nepal like Lord Krishna.”

On the agrarian crisis, Sakshi Maharaj said the Uttar Pradesh government has failed to address this problem in the state and that the funds allocated by Central government to the distressed farmers have not reached them.

He also hit out at the state government for propagating “goondaraj”.

“There is goondaraj in Uttar Pradesh. The law and order situation here is in complete shambles. The Akhilesh Yadav government failed to pay any attention to the farmers affected by unseasonal rain and hailstorms. Crores of rupees were allocated by the Centre for the aggrieved farmers but the relief did not reach them,” he said.

Party spokesman Abhishek Singhvi told reporters in Delhi that the remarks showed how low level he could stoop to.

He said even to react to such remarks would mean reducing the level of debate.