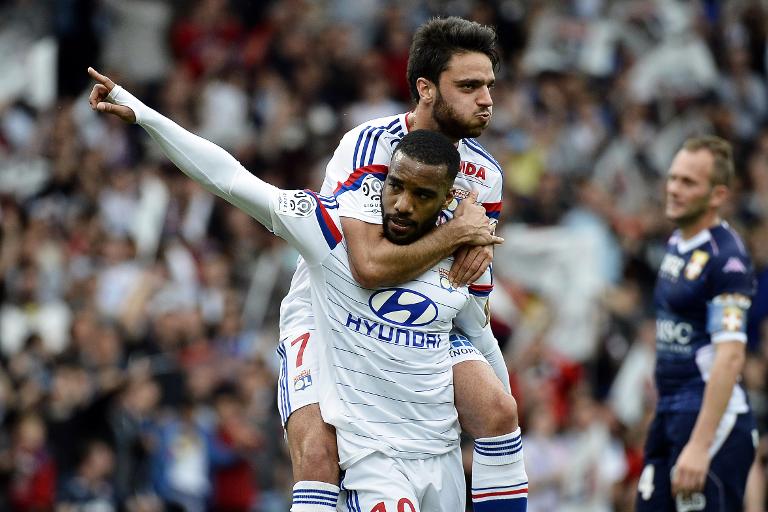 Lyon reclaimed top spot in Ligue 1 on Saturday with a convincing 2-0 victory over strugglers Evian to put the pressure back on title rivals Paris Saint-Germain.

A superb free-kick from Clement Grenier after just 20 minutes and an Alexandre Lacazette penalty seven minutes from the break gave Lyon the three points as they remain in the race for their first French league title since 2008.

Lyon have the same 71 points as PSG but lead on goal difference.

However, the capital city club can restore their three-point lead when they head to mid-table Nantes in Sunday’s late game.

“We don’t want to have any regrets in the end. There’s three matches to play. We are going to get maximum points,” said Lyon defender Henri Bedimo.

“PSG has maturity with players used to playing at the highest level and they are used to fighting for the title.

“But we’re not thinking about them. We are struggling a bit at the moment but the three points were the most important thing today.”

“We believe in ourselves of course but we also have to be realistic,” the Cameroon player added.

“We’ll need a bit of help from another team but we will have to do our job too.”

Lyon’s victory was tarnished to a degree when Clinton Njie limped off early in the second half with what looked like a tweaked hamstring.

Evian lost their 20th Ligue 1 game of the season and remain locked in 17th place, just one point away from safety.

On Friday, an Andre Pierre Gignac-inspired Marseille boosted their prospects of competing in next season’s Champions League win a 2-0 win over relegation-bound Metz.

Gignac, out of contract at the end of the season, celebrated his 100th goal in the French top flight as the first half was drawing to a close, and then made inroads into his second century after the break.

Marseille, who were desperate to put a stop to a four-match losing streak, moved provisionally above Saint-Etienne on goal difference into fourth on 60 points, two points shy of Monaco occupying the third and final Champions League spot.

The Principality side host strugglers Toulouse on Sunday while Saint-Etienne, in fourth, go to Corsica to face Bastia later Saturday.

On Sunday, Lille face local rivals Lens, who are rock bottom and must win and hope other results go their way to put off a return to Ligue 2.