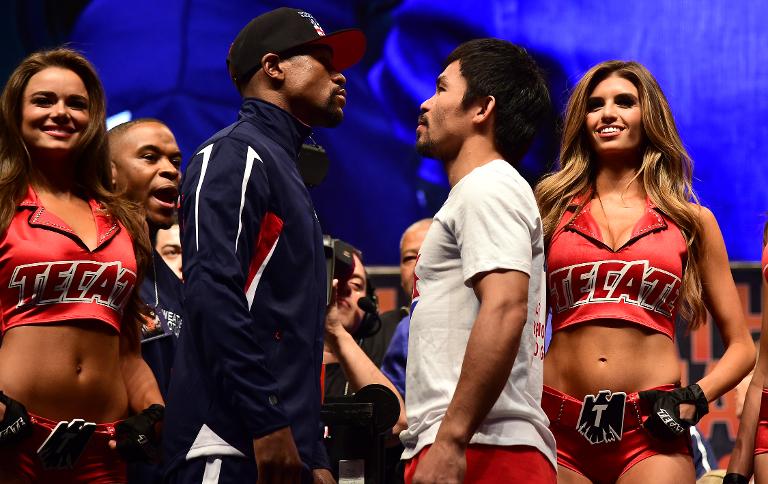 Manny Pacquiao and Floyd Mayweather went nose-to-nose in front of a frenzied standing-room only crowd in a glittering weigh in showcase at the MGM Grand Garden Arena.

Many of those inside the arena were unable to get tickets to the sold out mega-fight, so this was their only chance to see their heroes before the fight which will determine the top fighter of his era and unify three welterweight titles.

A deafening roar went up from the raucous crowd of 11,500 when the two champions stood face-to-face in a brief stare down under the multi-colored strobe lights at the front of the stage.

“Pacquiao is going to win in the sixth round because he just has so much aggression about him,” said Adam Reed, who flew all the way from London having scored a precious ticket to the fight.

Crowd favorite Pacquiao was beaming as he made his way to the stage first. Chants of “Manny, Manny” echoed through the stands from his adoring supporters, who shelled out $10 — or in some cases hundreds on the secondary market — for their weigh-in tickets.

They waved the national flag and held up “Pacquiao for President” signs recalling the fighter’s other career as a congressman.

Fans of the Filipino also came dressed in a variety of costumes, including three Filipino nurses from Miami, Florida, who wore yellow Pac-Man video game outfits.

“Pacquiao is going to come out fast and win the first six rounds,” said 40-year-old Michelle Lakibul. “Mayweather will win four rounds in the middle but Manny will come on later and win the fight by a decision.”

Pacquiao was relaxed and smiling, even thanking Mayweather on stage for helping make it happen.

“I believe the fans deserve this fight. They deserve a good fight,” Pacquiao said.

Pacquiao stepped on the scale first followed by Mayweather as they both came in under the welterweight limit.

Pacquiao said he saw something in Mayweather’s eyes that reinforced his belief that he would be the first to make the American taste defeat.

“I saw a man with a lot of worries,” he said of the stare down.

When it was Mayweather’s turn to climb up on stage he appeared all business as he gazed out at the crowd.

Boxing fan Frank Pino, of Phoenix, Arizona, said he is betting on Mayweather to win by a decision.

“Look at his past performances,” said the 32-year-old who sells medical equipment. “He plays with opponents early on then takes it in the later rounds.”

Even some die-hard Pacquiao fans aren’t sure their courageous fighter is going to win.

“Like everybody else my heart is with Pacquiao but Mayweather will win,” said George Tavarez, 34, of Yakima, Washington. “Floyd is too smart and he has a perfect game plan.”