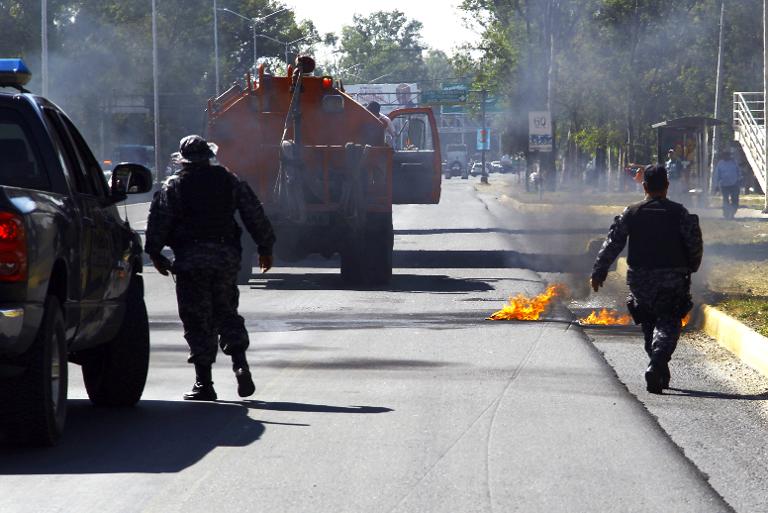 Gunmen forced down a military helicopter in western Mexico, killing three troops as violence escalated across Jalisco state during a new operation against a powerful drug cartel.

Seven people were killed across Jalisco, including the three soldiers and a state police officer, while 19 were wounded, officials said. Federal authorities reported three gang suspects dead, but state officials spoke of two and a civilian.

Three-dozen vehicles were set on fire or used as roadblocks in 39 spots affecting 25 towns, including the Pacific resort of Puerto Vallarta and Guadalajara, Mexico’s second biggest city, where residents were urged to stay indoors during the May Day holiday.

Banks and gasoline stations were torched and 19 people were detained as violence flared on the day that the military and federal police launched Operation Jalisco to crack down on the Jalisco New Generation Drug Cartel.

Another 15 vehicles were torched in the neighboring states of Colima, Michoacan and Guanajuato, said National Security Commission Monte Alejandro Rubido.

“In reaction to the federal presence, members of the criminal group began several actions in a bid to thwart the actions of the security agencies,” Rubido told a news conference.

Ten soldiers and two federal police officers were injured in the incident, which took place when the aircraft spotted carloads of gunmen on a road between the towns of Casimiro Castillo and Villa Purificacion.

President Enrique Pena Nieto said in brief remarks to reporters that the operation was “in combat against a highly dangerous criminal organization.”

Officials say the New Generation cartel, led by Nemesio Oseguera, alias “El Mencho,” has grown so powerful that it has produced its own assault rifles in makeshift gun assembly shops and has forged ties with gangs worldwide.

The New Generation cartel has violently defied authorities this year, killing 20 police officers in two ambushes in March and April.

The helicopter attack was near the town of Autlan, where a state police officer died in a clash with gang suspects. Shootouts were reported in three other towns.

Starting in the morning, buses and trucks were torched in more than a dozen streets of Guadalajara. The fires were put out hours later.

Such tactics have been used by gangs elsewhere in Mexico to try to thwart police and military operations.

Authorities urged residents of Guadalajara to stay indoors. No shootouts were reported in the city.

“Remain calm. If you have any reason to leave your house, don’t go out,” the Jalisco state prosecutor’s office said on Twitter.

The US consulate issued a security message advising its employees “to remain in their homes until the situation is resolved” and its citizens to avoid traveling to the area.

By early evening, Governor Aristoteles Sandoval told reporters that the situation was “calm” across Jalisco, though authorities remained under “code red.”

The New Generation is a rising power of Mexico’s underworld that had been overshadowed by other groups such as the Sinaloa, Zetas, Gulf and Knights Templar cartels.

The gang has even recruited military deserters, including foreign ones, security officials say.

The cartel has drawn the attention of the US government, which has funded Mexico’s battle against drug traffickers by providing equipment, training and intelligence.

Last month, the US Treasury Department slapped financial sanctions on the New Generation and its leader Oseguera, as well as its allies, the Los Cuinis cartel.