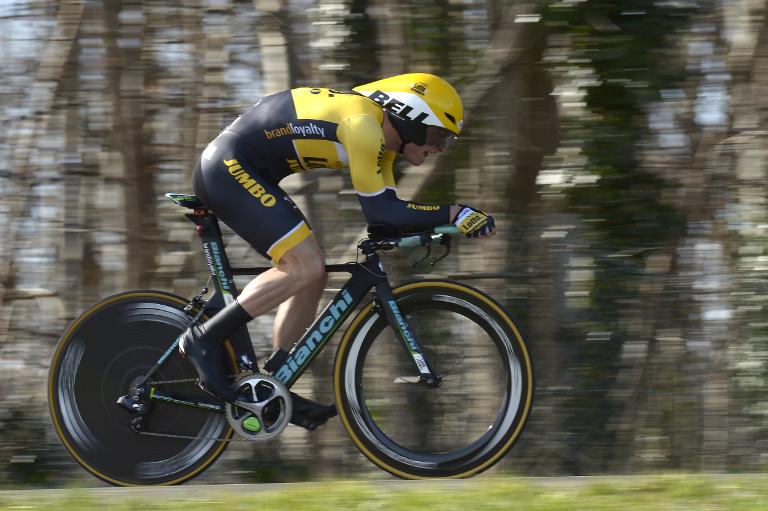 Dutchman Moreno Hofland earnt his Lotto NL team’s first victory of the year as he won the second stage of the Tour de Yorkshire on Saturday, and was then mistaken for Jose Mourinho.

Team Lotto NL-Jumbo had been the only World Tour squad yet to record a victory this year but Hofland finally threw that sorry statistic onto the scrapheap.

“Finally the first victory is there! For me and the team. The team road superbe (rode superbly) today happy to finish it off!” said Hofland on his Twitter account.

The 23-year-old then found himself mistaken for a famous football manager, Chelsea’s Mourinho.

“UK-youngsters hunting for @MorenoHofland. ‘Is he called Mourinho?’ asked little Sky-hatted Ben from Lincoln,” tweeted Dutch journalist Daan Hakkenberg from the Verslaggever AD Sportwereld newspaper, alongside a picture of the said Ben as he waited for an autograph.

The largely flat stage was always expected to end in a sprint finish in front of York Racecourse, and Lotto NL combined with Pelucchi’s IAM squad to control a seven man breakaway.

Yorkshire did not quite see the throngs of people that greeted the first two stages of the Tour de France last year but the breakaway riders were so impressed with the numbers on the road for what is in effect a third tier event, that they started the word ‘goosebumps’ trending on Twitter.

“What an amazing crowd in #letouryorkshire! It was an honour to ride in front al day. #goosebumps,” said Belgian Stijn Steels.

Dutchman Ivar Slik added: “What a day to be in the break @letouryorkshire! So much spectators I’ve never seen! #goosebumps.”

Two of the breakaway seven went it alone once they had arrived in York for two 20km circuits of the historic city.

Belgian Bert De Backer eventually dropped Briton Mark McNally but was himself reeled in with less than 2km to ride.

Kittel had quit after around 100km of Friday’s opening stage citing a lack of form as he already trailed the peloton by six minutes while Swift crashed out soon after that on a slippery descent.

It meant Hofland and Pelucchi were the two favourites for the sprint and their teams were acutely aware, controlling the breakaway and then leading the charge to the finish line.

BMC’s Greg Van Avermaet tried to get the jump on the sprinters down the final straight, opening a small gap, but despite a valiant effort, he was caught and Hofland had just enough to beat Pelucchi.

Nordhaug increased his lead overall to 10sec after a slight split appeared in the peloton as they rolled into the finish, costing some riders six seconds.

Frenchman Thomas Voeckler was on the wrong side of the split and having started the day second at 4sec he dropped to third at 10sec, with compatriot Stephane Rossetto also losing time to sit fourth at 12sec.

Sunday’s final stage is over 167 lumpy kilometres from Wakefield to Leeds.

“It’s going to be a really hard race tomorrow and it will be a tough fight for the overall,” said Nordhaug.

The third stage will also be a last chance for British cycling legend Bradley Wiggins to deliver on his pre-race promise to attack.

The 35-year-old, who will attempt on June 7 to break the new World Hour Record set by compatriot Alex Dowsett earlier on Saturday, currently lies in 89th overall more than 15min off the pace.