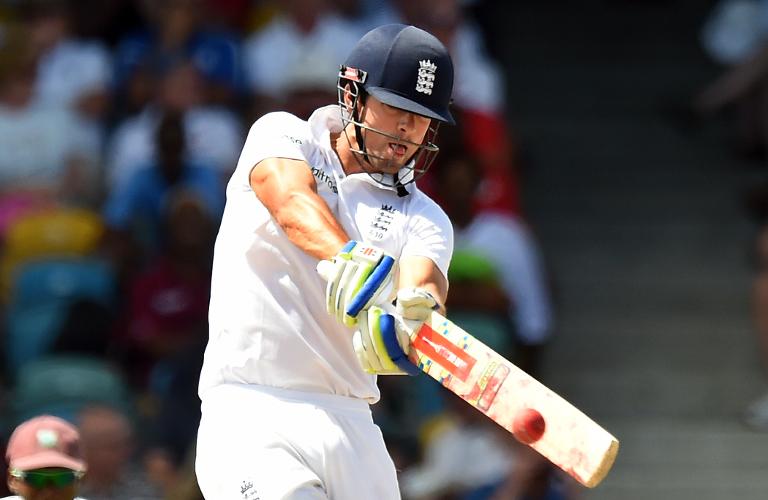 Alastair Cookâ€™s long overdue 26th Test hundred saved England from complete collapse as his side reached 240-7 at stumps on the opening day of the third and final Test against the West Indies.

Captain Cook was dismissed for a painstaking 105 off the last ball of the day at the Kensington Oval.

His determined innings, compiled with exceptional care over 315 minutes and occupying 266 deliveries, was also the 100th Test century scored on the Caribbeanâ€™s oldest international ground, dating back to the first-ever Test match in the region, against England in 1930.

Having seen his side reduced to 38 for three in the morning session after winning the toss and choosing to bat, Cook displayed great resolve, stroking 12 boundaries on a pitch offering some encouragement to the faster bowlers.

He put on 98 for the fifth wicket with Moeen Ali in mid-afternoon in what was the only period of play that England dominated.

That partnership ended when Ali was run out for 58 for the second time in as many innings in the series.

â€œIt was great to see Cooky get that hundred. You saw how much it meant to him, the team and the fans,â€ said Ali in reflecting on his captainâ€™s vital innings.

â€œIf we can get a few more runs from the lower-order and get to 350 on the second day, then weâ€™ve got a chance because there is something here for the spinners and Iâ€™m looking forward to bowling on this pitch.â€

As Cook closed in late in the day on the landmark that had eluded him for 35 previous innings and almost two years, he lost all-rounder Ben Stokes to a catch at gully off Shannon Gabriel operating with the second new ball.

However an on-driven boundary off the same bowler took him to the landmark, only for a careless shot in the final over of the day to bring about his demise via a catch to wicketkeeper Denesh Ramdin off part-time off-spinner Marlon Samuels.

Jason Holder dispelled doubts about his fitness with two important wickets at the start of the day after Gabriel exploited Jonathan Trottâ€™s vulnerability to fast, short-pitched bowling.

Stretchered off the field on the last day of the second Test when he appeared to turn over his left ankle badly while bowling, Holder showed no ill effects of that injury and enjoyed swift success.

Playing on his home ground, the tall fast-medium bowler uprooted Gary Ballanceâ€™s middle-stump and then induced an indeterminate prod from new batsman Ian Bell with a slower delivery to take a sharp catch off his own bowling before the prolific right-hander had scored.

Trott, who has endured a wretched run since returning to the England side in this series after 17 months out of the international game, fended at a lifting delivery for Veerasammy Permaul to dive forward and take the catch at forward short-leg.

It was his third â€œduckâ€ in five innings and heightens concerns about his ability to cope with what are expected to be much tougher challenges from New Zealand and Australia in the upcoming English summer.

In-form batsman Joe Root was Englandâ€™s only casualty in the second session.

Coming off an unbeaten 182 in the second Test in Grenada a week earlier, he stroked his way to 33 off 35 balls before edging a delivery from left-arm spinner Permaul into to the gloves of Ramdin.

England lead the three-match series 1-0 after winning the second Test in Grenada by nine wickets while the opening game in Antigua was drawn.