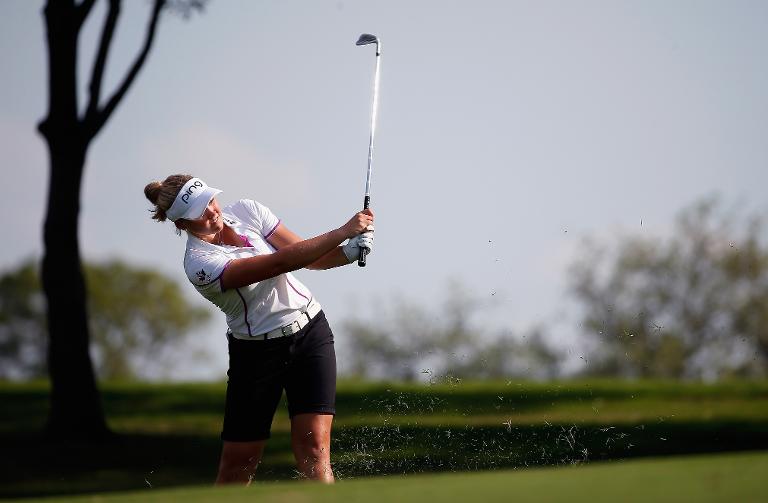 The 17-year-old, who came through Monday qualifying to secure her spot in the field, had a 36-hole total of eight-under par 134 and a one-stroke lead over world number two Park In-Bee.

South Korea’s Park fired a five-under par 66 to vault into second place on 135 alongside first-round co-leader and US Solheim Cup captain Juli Inkster (69).

Henderson is making a habit of contending. She held the second- and third-round leads before finishing alone in third place at last week’s Swinging Skirts LPGA Classic.

She said that experience of leading a tournament as a professional had taught her a lot.

“Just the way I feel around the golf course. I’m very much a feel player,” Henderson said. “And I had a lot of emotions, and I really don’t know how to explain it, but just the way I feel. I learned a lot from the atmosphere last week and just watching some of the other players.”

With a victory Henderson would become the first Monday qualifier to win since Laurel Kean at the 2000 State Farm LPGA Classic, and the first Canadian in the winner’s circle since Lorie Kane in 2001.

Henderson would also join current world number one Lydia Ko and Lexi Thompson as the only players in LPGA Tour history with a victory before turning 18.

Ko, who turned 18 in April, stole the victory away from Henderson last week in the final round. But the seven-time LPGA winner walked away impressed with Henderson.

“I knew Brooke was a very talented golfer. I feel like she’s quite aggressive and she’s holing a lot of putts, she’s striking the ball very well,” said Ko, who made the cut right on the number on Friday.

“Especially seeing how well she played under the pressure last week, I wasn’t surprised that she’s still on top of the leaderboard today.”