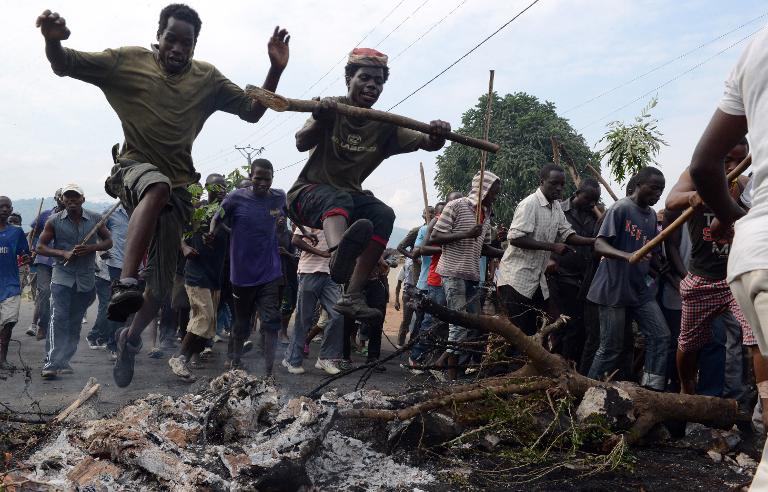 Three people were killed Friday in grenade attacks on police in Burundi where nearly 600 people have been arrested during protests and clashes sparked by the president’s bid to stay in power.

The director general of police, General Andre Ndayambaje told AFP two officers were killed and one was wounded in the attack in Kamenge district of the capital Bujumbura, while a local resident said a civilian also lost his life and two others were wounded.

A similar attack in the centre of the capital of the small central African nation wounded three policemen, the general said.

A senior police officer, who requested anonymity, said “It is clear that the demonstrators launched the simultaneous attacks”.

“If they want war, they will get war,” he said.

A Burundian analyst was more cautious, saying the attacks could have been the work of protesters but could also be being manipulated to “give credit to the official theory of an armed demonstration”.

The political unrest erupted after the ruling CNDD-FDD party last weekend designated President Pierre Nkurunziza as its candidate in the next presidential election, which is due to be held on June 26.

Opposition figures and rights groups say Nkurunziza’s attempt to stand for a third consecutive term violates the constitution as well as a peace deal that ended a civil war in 2006.

The United Nations voiced alarm over the political crisis, saying Nkurunziza’s government was engaged in a brutal crackdown but “will not succeed in quashing dissent”.

Social media has been blocked and radio stations have been shut down.

The protesters announced a two-day truce but warned they would return to the streets on Monday unless Nkurunziza backs down.

Sporadic clashes continued in parts of Bujumbura on Friday, witnesses said, while hundreds of university students — whose student lodgings have been closed by the government — have been camping outside the US embassy, saying they want protection.

According to the Burundian Red Cross, at least seven people have died and 66 others have been wounded in nearly a week of clashes between police and protesters in the capital. Medical sources say many have suffered gunshot wounds since Sunday.

Police spokesman Pierre Nkurikiye told AFP that 577 arrests have been made, with nearly 250 cases sent for prosecution and 150 undergoing questioning. The remainder have been released.

A spokeswoman for the prosecutor’s office, Agnes Bangiricenge, said those charged would be tried for “taking part in an uprising” and risked between five years and life behind bars.

A civil society leader on Friday called on protesters to stop demonstrating for two days and urged the president to “take advantage of these 48 hours to think about the consequences of his project and to give up by Monday”.

“If not, we will return to the streets on Monday with much more vigour and we will not leave until he gives up his project,” warned Pacifique Nininahazwe, who heads one of Burundi’s main civil society groups.

Speaking in Geneva, Rupert Colville, spokesman for the UN human rights office, told reporters that Burundian authorities were engaging in a brutal crackdown.

“According to one credible report, over 400 individuals are being held in extremely overcrowded conditions, with detainees having to sleep standing up,” he said.

“Detainees have also been beaten, particularly on their feet and buttocks, with some of those released having trouble walking due to the beating,” he added.

On Thursday a US envoy warned the situation was “very dangerous”, and said Washington could impose targeted sanctions over the crisis.

“The current situation is very, very dangerous, and that some of the measures that have been taken, including in recent days, to shut down social media, to suspend radio stations not only are wrong as a matter of principle but very counter-productive,” said Tom Malinowski, the US assistant secretary of state for democracy, human rights and labor.

The government was forced to move its scheduled May 1 parade from the city centre — to where demonstrators have been trying to march all week — to another part of the capital “so that protesters don’t try to disrupt the event”, Bujumbura’s mayor Saidi Juma told AFP.

Nkurunziza, a former rebel leader and born-again Christian from the Hutu majority, has been in power for two terms since 2005.

His supporters say he is eligible to run again, since his first term in office followed his election by parliament — not directly by the people as the constitution specifies.