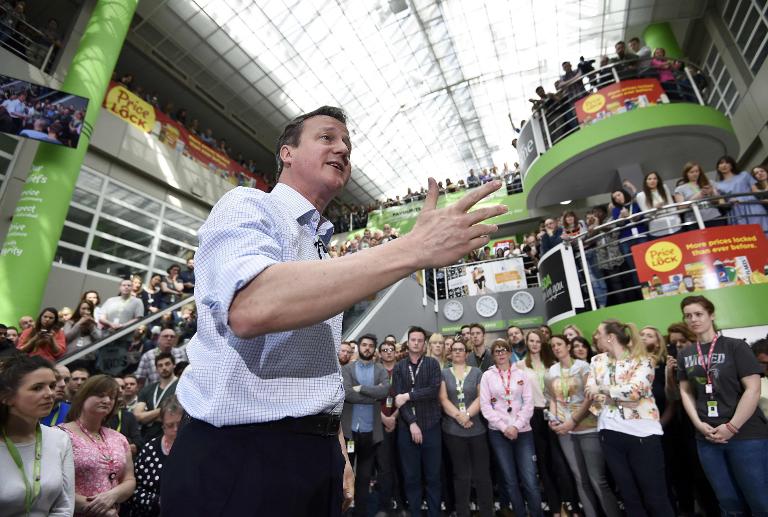 Kitchens have been at the heart of Britain’s general election campaign, with party leaders giving confessional, off-the-cuff interviews as they shuffle between the tea cups and the toaster.

Conservative Prime Minister David Cameron, opposition Labour leader Ed Miliband and Deputy PM Nick Clegg of the Liberal Democrats have all been peeling vegetables and doing the washing up in set-piece interviews with the major broadcasters.

In the run-up to Thursday’s knife-edge election, British voters have watched “Dave” lovingly wash his cherry tomatoes while preparing the family salad, and “Ed” drinking tea in his ostentatiously modest “kitchenette”.

Meanwhile “Nick”, joined by his Spanish lawyer wife Miriam, was filmed sipping a glass of white wine while a paella simmered away in the background.

Each time, the ritual was carefully staged, the relaxed setting rigorously observed. Pullovers and shirt sleeves abound. The children are not far away. A show of real life, neatly arranged for the television cameras.

“It’s more and more important for politicians to show that they are like ordinary people,” said Nick Turnbull, a politics lecturer from the University of Manchester.

“Male candidates in the kitchen is exactly what this is about.”

In a country gripped by a relatively new-found passion for cooking driven by celebrity chefs like Jamie Oliver and Gordon Ramsay, the kitchen interview is all about the leaders showing off a modern man image.

It also ties in with highly prevalent television formats.

“The kitchen also relates to the high-profile success of the celebrity chef cookery show,” said Dominic Wring, a reader in political communication at Loughborough University.

Only Nigel Farage, leader of the anti-immigration United Kingdom Independence Party, has opted to get out of the house, to be filmed in his more regular environs.

“He’s in the pub with his pints,” Turnbull told AFP.

“He wouldn’t be in the kitchen, because their (UKIP’s) voters are older men, more traditional, not middle class.”

Turnbull said that for the three main party leaders, the kitchen image was important in projecting that modern man image out to the middle classes, “the main class to win for the parties for 20 years now” — and female voters.

Interviewed standing by his oven, Clegg insisted it was his wife who wore the trousers round their house.

And when one presenter was stunned by the “immaculate” nature of Nicola Sturgeon’s “show home” kitchen, the Scottish National Party leader said: “I had my husband up most of last night cleaning it before you arrived! It’s not always so tidy.”

Even before he became prime minister in 2010, Cameron launched his own “WebCameron” channel on YouTube in which he appeared with an apron on, doing the dishes while spelling out his political philosophy.

But never before now has the kitchen played such a role in electoral strategy.

“A kitchen is personal enough but you still can exercise some control,” said Philip Habel, an expert in political communication and political behaviour at the University of Glasgow.

“The kitchen communicates a warm and a family environment, a relaxed environment,” he told AFP.

Staying in the safety of home has actually proved a useful tactic in this election campaign, where candidates have gone out of their way to avoid the risk of meeting voters, who might ask embarrassing questions or provoke a fatal gaffe.

But even with food, leaders have to exercise caution. Cameron insisted on eating a hot dog with a knife and fork — but then given the mockery Miliband faced after struggling to chew a bacon sandwich, it’s not hard to see why.

Ridiculed for the sandwich face-pulling while out on the road, the Labour leader was also pilloried after his kitchen interview.

One Daily Mail commentator branded the kitchen “bland, functional, humourless, cold and about as much fun to live in as a Communist era housing block in Minsk” — and triggered an inquest.

The “sterile little box”, it turned out, was the nanny’s smaller, secondary “kitchenette” in the Milibands’ plush north London home, with the expansive main kitchen kept away from the cameras.

But all the kitchen sink drama seems to be turning the voters’ stomachs.

A recent ComRes survey found 71 percent had no interest at all in neither the candidates’ kitchens or home life.