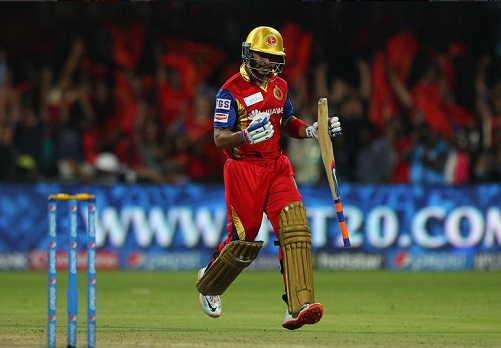 In a rain-hit tie reduced to 10-overs-per side, KKR scored 111 for 4 courtesy Andre Russell’s 17-ball-45 but it was Mandeep’s exhilarating effort that saw Virat Kohli’s boys romp home with two balls to spare.Â

Mandeep’s knock had four boundaries and three sixes with the last two maximums coming off successive deliveries from Andre Russell’s last over where RCB required 13 runs.Â

With 9 required off last four balls, Mandeep first made room to slash Russell for a six over point and then pulled over deep fine leg to finish off the match in style.Â

It was the fifth and sixth deliveries off the penultimate over bowled by Umesh Yadav that turned the match head on. Mandeep played a delicate lap shot over short fine leg off the fifth delivery of 9th over while the next went for boundary through vacant third man region.Â

The win took RCB to nine points and fourth spot removing Delhi Daredevils. It also kept them in the hunt for play-offs.