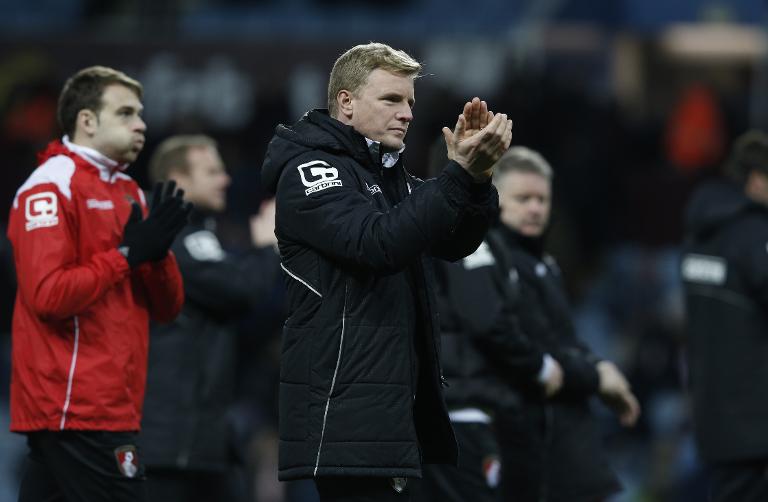 Bournemouth were promoted as Championship winners after routing Charlton 3-0 to take the title from previous leaders Watford on the final day of the second tier season.

Eddie Howe’s team had effectively sealed their place in the Premier League on Monday when they defeated Bolton to move three points clear of Middlesbrough with a vastly superior goal difference.

The Cherries needed a point from their trip to the Valley to be certain of clinching a spot in the English elite for the first time and they achieved that aim with the added bonus of finishing in first place.

Ritchie netted again in the 85th minute and the 4,000 Bournemouth supporters who made the trip from the south coast to south London were able to celebrate the title when news filtered through that Watford had been forced to settle for a 1-1 draw after conceding a stoppage-time equaliser against Sheffield Wednesday.

“We are thankful for that bit of help but I do think we deserve it,” Howe said.

“In my opinion we have been the best team this season. We have led the division for the longest time and I think it is fitting reward for the players.”

Watford had already secured their place in the Premier League last weekend, but their hopes of taking the winners’ trophy as well were dashed after Atdhe Nuhiu struck to cancel out Matej Vydra’s first half goal at Vicarage Road.

“We’re disappointed we don’t lift the silverware, this was our dream, but now we must start thinking about what is in front of us,” Watford manager Slavisa Jokanovic said.

There was more drama in the race for the play-offs as Derby slipped out of the top six, allowing Brentford to claim a place in the end-of-season competition for the last spot in the Premier League.

Derby needed only one point from their home game against Reading to be certain of qualifying for the play-offs.

But Steve McClaren’s side crumbled to a 3-0 defeat as a Reading team with nothing to play for ran riot thanks to goals from Kwesi Appiah, Michael Hector and Gareth McCleary.

The Rams, beaten in last season’s play-off final, had a chance to equalise after Appiah’s opener but Darren Bent’s penalty was saved by Adam Federici, condemning former England coach McClaren to defeat in what could prove to be his final match in charge as reports continue to link him with the Newcastle job.

“I’m really annoyed, angry, and frustrated about the last two months and I’m determined to do something about it,” McClaren said.

“Absolutely nothing has been agreed (with Newcastle. No one has told me otherwise.”

Derby’s stumble allowed Brentford to rise to a fifth place finish as the second tier’s surprise package cruised to a 3-0 win over relegated Wigan at Griffin Park.

In their first season in the second tier since 1993, Brentford have thrived under boss Mark Warburton, who in a bizarre twist has already been told he will be dismissed at the end of the season regardless of whether the tiny west London club win a place in the top-flight.

Brentford will face fourth placed Middlesbrough for a place in the play-off final, with the second semi-final a potentially explosive East Anglian derby between bitter rivals Norwich and Ipswich.

Norwich secured third place with a 4-2 win over Fulham, while Ipswich scraped into sixth spot despite losing 3-2 at Blackburn.

Wolves, 4-2 winners against Millwall, missed out on a play-off berth on goal difference.

At Bloomfield Road, hundreds of angry Blackpool supporters forced the abandonment of their already-relegated team’s match against Huddersfield with a pitch invasion to protest against club owners the Oyston family.