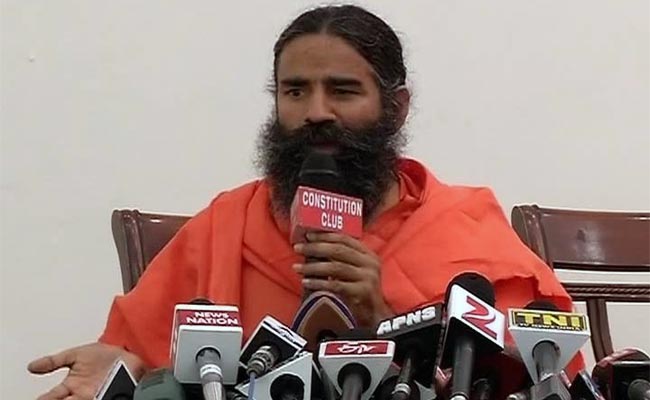 New Delhi: Yoga guru and youth icon Baba Ramdev took to the media to lash out at opposition lawmakers who alleged in the Parliament that an ayurvedic concoction available at â€˜Patanjaliâ€™ pharmacies that he runs exclusively sells medicines that promise the birth of a male child.

â€œDo your homework,â€ he told the opposition lawmakers.

“Through me, a fakir, they are trying to malign Prime Minister Narendra Modi,” he said, dismissing as an “unnecessary controversy” the furore in the Rajya Sabha yesterday over his “Putrajeevak Beej” which literally translates to “the seed that gives life to a son.”

Janata Dal (United) lawmaker KC Tyagi had held up a packet of ‘Putrajeevak Beej’ in the House and said, “We welcome the Prime Minister’s ‘Beti Bachao, Beti Padhao’ (Save the girl child, educate her) campaign, but the Haryana government has appointed as brand ambassador a man whose pharmacy sells this.”

He also asked, “Does the Government approve of this?” as other lawmakers demanded a ban on the medicine alleging it was illegal and unconstitutional. Health Minister JP Nadda promised “proper action” assuring Parliament that “the government is very serious on sex-ratio,” and that the Prime Minister is personally monitoring the ‘Beti Bachao, Beti Padhao’ campaign.

The PM’s girl child campaign aims at reversing the skewed gender ratio in many states. It was launched a few months ago from BJP-ruled Haryana, which has the worst gender ratio in the country with cases of female infanticide still reported.

Baba Ramdev has asked his detractors to “give evidence” in support of their allegations. He also said he did not intend to change the name of his concoction. “If I change one, I will have to change all of them,” he said, arguing that the names of his “ayurvedic medicines” are derived from the botanical names of ingredients and should not be taken literally.

Not only is Baba Ramdev Haryana’s brand ambassador, he was reportedly considered for the prestigious Padma Vibhushan award by the Centre this year. Last week, he declined the Haryana government’s offer of a cabinet minister’s status. The yoga guru had campaigned for the BJP in last year’s Lok Sabha elections.