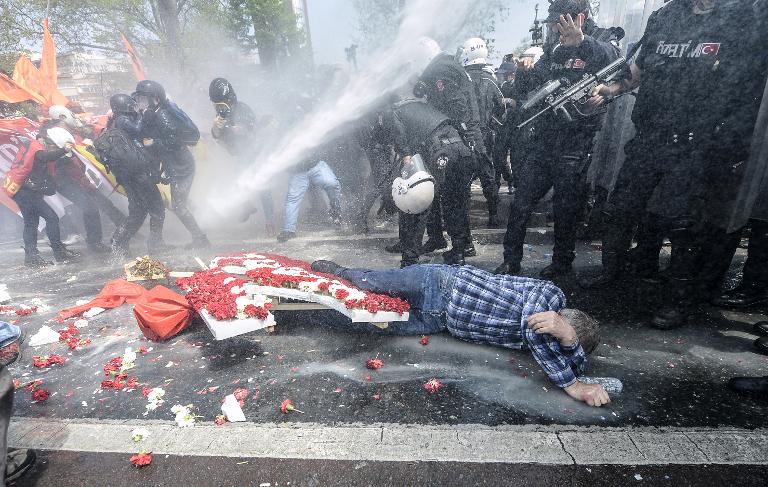 Turkish police on Friday used water cannon and tear gas to disperse May Day protesters in Istanbul as tens of thousands of labour activists turned out worldwide to defend their rights at a time of austerity.

Turkish police had blocked all vehicle access and cut public transport to prevent protests on Taksim Square in the centre of Istanbul, the traditional focus for protests in the country’s largest city.

Police moved in on the protesters close to the shores of the Bosphorus as they tried to head towards the square, using water cannon trucks and spraying tear gas, an AFP correspondent said.

Even before the police moved in on the Besiktas protesters, Istanbul’s police chief Selami Altinok had said that 136 people had been arrested in various points in the city during the day.

This is the first May Day in Turkey, a national holiday in the country, to be marked after parliament passed a controversial security bill this year giving the police greater powers to crack down on protests.

“If find that this insisting on (protests in) Taksim is wrong and has a purpose. Having a meeting in Taksim means basically paralysing all Istanbul,” Erdogan said in a speech at his Ankkara presidential palace.

By contrast, thousands of people packed into the centre of Athens in response to a call from public and private unions, joined by the country’s controversial anti-austerity Finance Minister Yanis Varoufakis.

In Moscow, around 140,000 workers and students paraded on Red Square, waving Russian flags and balloons, a spectacle harking back to Soviet times.

In the Russian capital, some marchers wore T-shirts with the face of President Vladimir Putin while in Saint Petersburg others held portraits of Putin and wartime tyrant Josef Stalin and placards reading “Homeland, freedom, Putin.”

Meanwhile, tens of thousands of people were expected to protest later in the afternoon in Milan against the opening Friday of the Expo 2015 in Italy’s financial centre.

Opponents of the project have accused the authorities of a needless waste of public funds by hosting the show at a time of austerity.

In South Korea, tens of thousands of workers held May Day rallies, vowing to wage an “all-out general strike” if the government pushes through with planned labour reforms.

Police interventions and arrests were reported in several Istanbul districts in addition to Besiktas, including Sisli, Okmeydani and Kurtulus.

A small group of a few dozen Communist protesters who tried to protest in the centre of Taksim Square were immediately surrounded by police who roughly arrested several people.

Taksim Square has been a flashpoint for clashes on Labour Day since dozens of people were killed there on May 1, 1977 when modern Turkey was going through one of its most turbulent periods.

“In 1977 there was a massacre. We simply want to the there (on Taksim) to commemorate that date. We cannot do it any other way, it is too symbolic for us,” Umar Karatepe, a leader of the DISK labour confederation, told AFP.

“The president, this man who usurps all our rights, cannot tell us that we are not able to celebrate May 1, it’s unacceptable.”

Turkish media said 20,000 police had been deployed in Istanbul backed up by 62 water cannon trucks.

The blocking of traffic left some locals with long walks to carry out their business while travellers carrying heavy luggage were stranded as they sought a ride to the airport.

In an apparent bid to discourage protests, the city’s main metro line was halted well before Taksim and services on the city tram service were stopping halfway.

Taksim Square, usually thronged with thousands of people in the day, was deserted save for police, journalists and plain clothes security agents.

Several ferry services from the Asian side of the Bosphorus were suspended to prevent people from crossing to join protests on the European side.

Private helicopters were also banned from taking to the skies to give the airspace to police choppers.