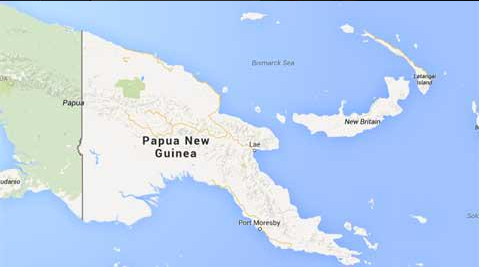 A 7.1 magnitude earthquake hit off Papua New GuineaÂ on Friday, 110 kilometres south-southwest of the town of Kokopo, the US Geological Survey said, just a day after a 6.7 magnitude tremor in the region.

The quake hit at 1336 IST, 689 kilometres northeast of the Pacific nationâ€™s capital Port Moresby, in the New Britain region at a depth of 53 kilometres.

There were no tsunami warnings, the Pacific Tsunami Warning Center said.

A 6.7 magnitude quake hit the same region yesterday, 131 kilometres southwest of Kokopo, but there were no reports of serious damage.

â€œThis is the second earthquake that has occurred in that region over the last two days,â€ co-director of the Joint Australian Tsunami Warning Centre Daniel Jaksa told AFP.

â€œThe previous one was about 10 kilometres to the southeast of this particular epicentre. Itâ€™s a very uninhabited region off the island of New Britain.Â The earthquake was a measure of 7.1, so thatâ€™s about 30 times smaller than the (recent) earthquake in Nepal.Â It should be like the one yesterday â€” no real impact.â€

New Britain, the largest island of the Bismarck Archipelago, is east of mainland New Guinea and has a population of around 500,000 people.

The island lies on the 4,000-kilometre long Pacific Australia plate, which forms part of the â€œRing of Fire,â€ a hotspot for seismic activity due to friction between tectonic plates.