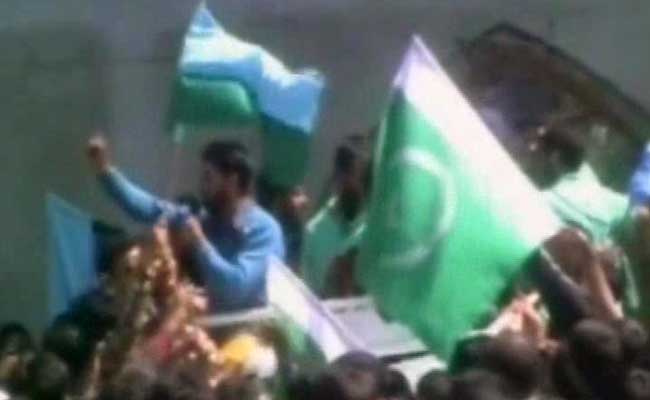 Srinagar: In a repeat of last month’s defiance, Pakistani flags were waved at a rally held by Kashmiri separatist Syed Ali Shah Geelani on Friday in Tral in South Kashmir.

Geelani, the chairman of the Hurriyat Conference, was addressing the rally after Friday prayers.

Hardline Hurriyat Conference Geelani leader also warned the Central government at the rally, and demanded that duration of the Hindu pilgrimage Amarnath Yatra be restricted to one month.

Last month, hardliner Masarat Alam was arrested after his supporters waved Pakistani flags at a rally that he had organised for Geelani, his ideological mentor.

Amid nationwide outrage, the Centre ordered the Jammu and Kashmir government, led by its ally PDP or People’s Democratic Party, to take “immediate and stringent” action.

Masarat Alam has been charged under a law that will allow the state to keep him in jail for two years without trial.

The Centre had categorically stated that waving of Pakistani flags or raising of anti-India slogans will not be allowed under any circumstances.

Under pressure, J&K Chief Minister Mufti Mohammad Sayeed had also said that there was no place for such acts.