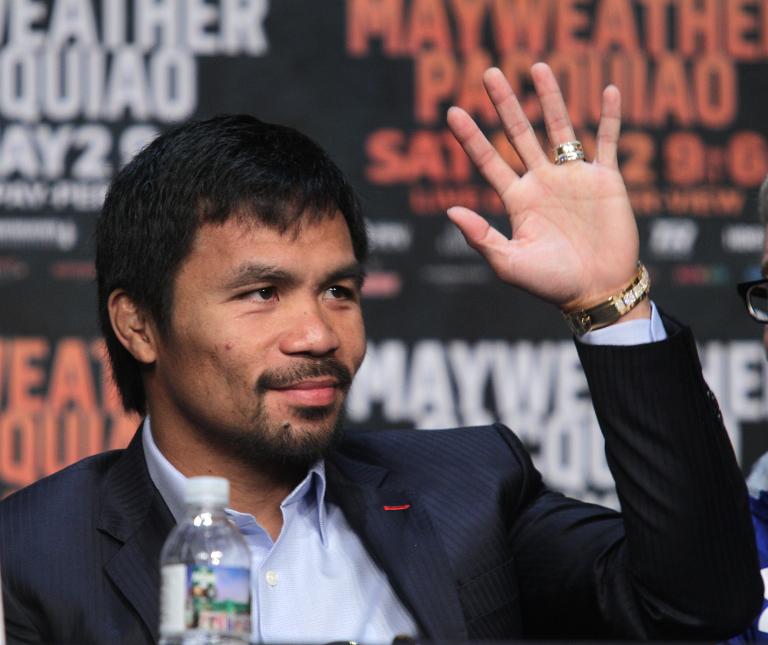 Floyd Mayweather is a slight favorite, but Manny Pacquiao is the people’s choice according to the money being wagered on the Filipino icon ahead of Saturday’s welterweight showdown.

Jay Rood, vice president of race and sports books at MGM Resorts International, said that some two thirds of the bets placed at MGM sports books have so far been for Pacquiao.

That included one $500,000 wager on the World Boxing Organization champ, who will bring a record of 57-5 with two drawn and 38 knockouts to the fight.

“Hopefully by this evening we’ll have taken a million-dollar bet on Mayweather,” Rood said. “We’re trying to get that hooked up now.â€

While Nevada’s legal sports books are taking some big wagers on Mayweather, the money coming in from Pacquiao believers have narrowed the odds to about 2-1.

“We took quite a bit of money yesterday, well over seven figures, and 60 percent of it was to Pacquiao,” Rood said Thursday.

The high-profile bout is a lock to break a bevy of records for boxing revenue, and Rood expects it to generate the highest handle for any fight in Nevada state history, with the total money wagered statewide coming in “somewhere between $60 million and $80 million.”

Most of that will be bet at sports books on the Las Vegas “Strip” where tourists and fans are flocking to soak up the fight week atmosphere even if they don’t have tickets to the bout.

“The further away you get from The Strip, the less financial impact it’s going to have on the sports books,” Rood said. “I think the handle on The Strip could be astronomical.”

“It’s a great price for either one of these fighters,” Rood said, a fact that has encouraged “really good two-way action”.

However, he said many of the bettors on this fight won’t necessarily be shopping for an attractive price.

While boxing doesn’t lend itself to the many proposition bets bookmakers offer for the NFL’s Super Bowl — a betting behemoth that spawned $116 million in wagering in Nevada this year — Rood said MGM sports books are offering a “little bit broader menu” of wagers to appeal to casual bettors.

“I think there’s going to be a lot of people who have maybe never been to a boxing match, have never bet a boxing match — they may be doing both this weekend, ” Rood said. “And they may never do it again.”