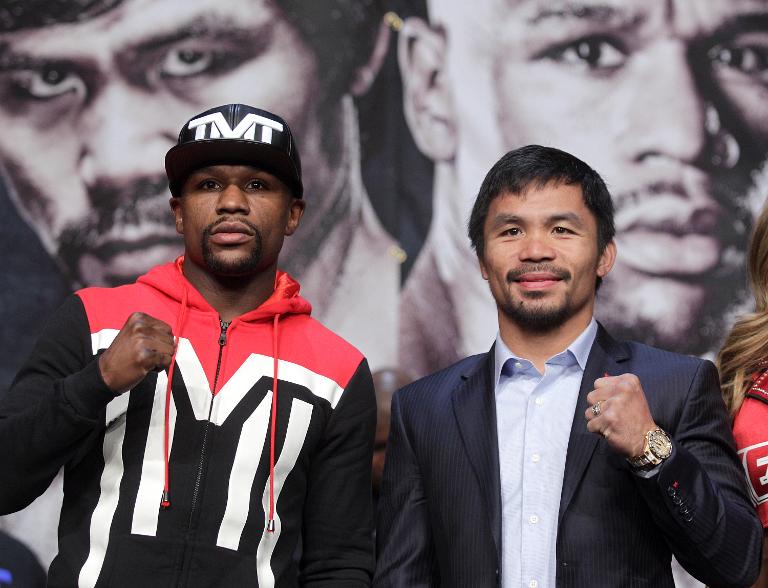 Manny Pacquiao and Floyd Mayweather will put boxing back on the cultural map for at least one glittering night on Saturday with a welterweight title showdown dubbed the Fight of the Century.

Prize-fighting has seen plenty of those, but in a sport that once made regular front-page news it has been years since a bout so captured the imagination of non-fight fans.

“This is the biggest fight in boxing history,” Mayweather declared on Wednesday in a spurt of hyperbole befitting the occasion.

Pacquiao-Mayweather is a hot topic from late-night chat shows to breakfast television and a sensation on social media.

Even the Kentucky Derby, traditionally America’s marquee sports event on the first Saturday in May, is playing second-fiddle, runner Itsaknockout reduced to a four-legged billboard with a blanket emblazoned with the fighters’ names and the horse’s connections wearing similarly inscribed attire.

The massive interest has only been fuelled by the gaudy financial figures surrounding the fight: revenue perhaps reaching $400 million fueled by as many as three million pay-per-view purchases and live gate receipts of some $70 million — all adding up to a possible $200 million payday for Mayweather and a $100 million bonanza for Pacquiao, who agreed to the lesser share of a 60-40 purse split.

But celebrity media outlets have also breathlessly followed the pre-fight doings of Pacquiao and Mayweather, with entertainment heavyweight People magazine expected to be on tap Saturday to keep tabs on the A-list-studded crowd at the MGM Grand Garden Arena.

Certainly Mayweather, 47-0 with 26 knockouts, and Pacquiao, 57-5 with two drawn and 38 knockouts, are two of the most talented fighters of their generation.

But Mayweather is 38 and Pacquiao 36, and many believe this would have been a better fight five years ago, when contractual hurdles and personal animosities prevented it from being made.

Now that it has arrived, the fight promises an intriguing clash of styles between men of contrasting personalities.

The soft-spoken Pacquiao is an iconic figure in his homeland, a two-term congressman tipped as a future president who credits the grace of God for lifting him from youthful poverty and later steering him away from a path of excess that his ring success allowed.

Mayweather, schooled in boxing from his toddler days by his father and trainer Floyd Mayweather Sr and uncle Roger Mayweather, has backed up his brash confidence with his unbeaten record and on the strength of the two surpassed Tiger Woods as the world’s highest-paid sportsman according to Forbes.

Pacquiao, who has earned world titles in an unprecedented eight weight divisions, is an aggressive southpaw, famous for going toe-to-toe and one of the hardest punchers in the welterweight division.

But Pacquiao hasn’t knocked out an opponent since 2009, and if any fighter can neutralize his attack it should be the elusive Mayweather, a consummate craftsman with vast ring know-how and the patience to use it.

Mayweather’s record includes eight victories over southpaws. That includes a 2006 victory over Zab Judah that showcased his ability to make mid-fight adjustments to turn the tide in his favor.

Although Mayweather is known for a defensive style that critics say edges into boring, Pacquiao and trainer Freddie Roach say they expect Mayweather to try to make the most of his size advantage by engaging early in search of a knockout.

Leonard Ellerbe, head of Mayweather Promotions, indicated that expectation was on target.

Mayweather has scored just one knockout since 2007, when he put down Victor Ortiz in a controversial quick-start in 2011.

Pacquiao and Roach say they have prepared to go the distance, and will be ready for anything Mayweather has to offer over 12 rounds.

“If he wants to fight me, good for me,” Pacquiao said. “If he’s running and moving around the ring, we’re prepared for that, too.”

Amid the hype, both Pacquiao and Mayweather have been reluctant to say the long-awaited match will define their legacies.

But Sugar Ray Leonard, an Olympic gold medallist and five-weight professional world champion, said the fight is all about legacies.

“It’s about history,” Leonard said. “A fight to make your palms sweat.”